Light is not just light. You probably already know this. What may be more surprising is how important a factor it is in photography. To be able to understand how it affects your photographs, you have to understand how the ‘quality of the light’ affects the mood in your photo, and this is easily shown with an example.

This photo I took on the very first day I got up early in the morning with the sole purpose to take photos. I got up an hour and a half before sunrise and drove to this place near my home. When I got home a couple of hours later and processed the photo, I was quite surprised when I saw the result. It was like no other photo I had ever taken before. And I thought ‘Yes! This is it!’.

Let’s see how the quality of the light developed this morning.

The light changes in the course of the day. Earlier in my life, I categorized the light into only two major parts, daylight and nights. At some point, I read about the blue hour, in an old book about photography. The blue hour occurs when the light starts, before the sun rises, and then again when the sun has set, before it gets dark.

Pictures taken in the blue hour results in pictures with a certain cold mood.

Pictures taken in the golden hour will be pictures full of warm colors.

NB! The golden hour varies during the course of the year and is also very different on different places on Earth. If you go to Iceland in the summer, you will have several hours of golden hours, because the sun doesn’t set, while close to equator you get the shortest golden hour.

Example of the blue and golden hour

Let’s have a look at how the light developed the morning, I took the photo above. As I said, I was up very early. At 4 o’clock in the morning we were ready, me, my tripod and my camera. That was about 45 minutes before sunrise, and I was ready for the show.

A wonderful thing about sunrises is that it’s just like a box of chocolates. You never know what you’re gonna get. What I saw is documented below as unprocessed photos. Even though I moved the camera, it is clear what happened. 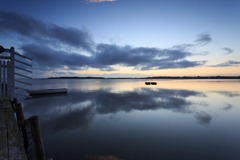 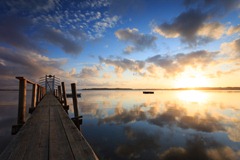 04:59am. ISO 100, 17mm, f13, 1/5 sec. The sun is clear in the sky and warm colors spread, and the Golden Hour is taking place. This photo is one of the 5 photos I used to process the photo in the top of the page. As you can see the unprocessed photo does not have the same impact. Not even close!

These four photos are span over 58 minutes. The two first in the blue hour, the third just as the golden hour is about to start, and the fourth is the in the middle of the Golden Hour. I think it is apparent why it is named the Blue Hour and the Golden Hour. During this time before sunrise and some time after sunrise you can take photos with an amazing light. And the same goes with sunsets, just before and just after the sunsets, the light is fabulous for taking pictures.

When the Sun rises high in the sky, the quality of the light changes. The light becomes ‘hard light’ with very harsh shadows, and it makes it more difficult to take great pictures like this one.

For obvious reasons, you will end up taking most of your pictures in broad daylight. It is difficult to take great photos in that light, but there are a few tips.

Not long after this last photo the sun was high enough in the sky, to make the photos less interesting. Also, it gave so much light, that the photos were blasted by flares in the lens and the colors started changing to something slightly less interesting. And within less than an hour the moment was completely gone.

And how does this affect your photos? Well, in many ways.

The white balance changes. I shot all shots in Auto White Balance. The first shot has a temperature detected to 7150 while the last one has 4800. If these numbers mean absolutely nothing to you, please read more about white balance here.