The Weekend Post – How to find the perfect Sunrise Spot

The photo is a 5 shot HDR, but I had put a 3 stop ND filter on the lens. I rarely do that, but I wanted the water to be more smooth. The water did have small ripples this morning, and by putting on a Neutral Density filter, I could make longer exposure times to smooth out the water.

The longest exposure is 20 seconds.

A Neutral Density (ND) filter is like a pair of sunglasses put on the lens. It darkens the lens. Getting a 100% color neutral ND filter is almost impossible, however a 3-stop filter like this one, has less colorcast than a 10-stop filter.

Thinking about it right now as I am writing this blogpost, it might just be the ND-filter that has added that tiny bit of fantastic bluish colors, that makes this light very special.

After having shot my two shots I hasted down to the main harbor, at the far end of this canal.

The Sun always rises in the East… NOT!

I know this area so well, I didn’t think much about it. The canal of Nyhavn is going from East to West and because the main harbor at the end is perpendicular it goes from North to South. And the Sun rises in the East, no big deal!

I hadn’t done my homework. 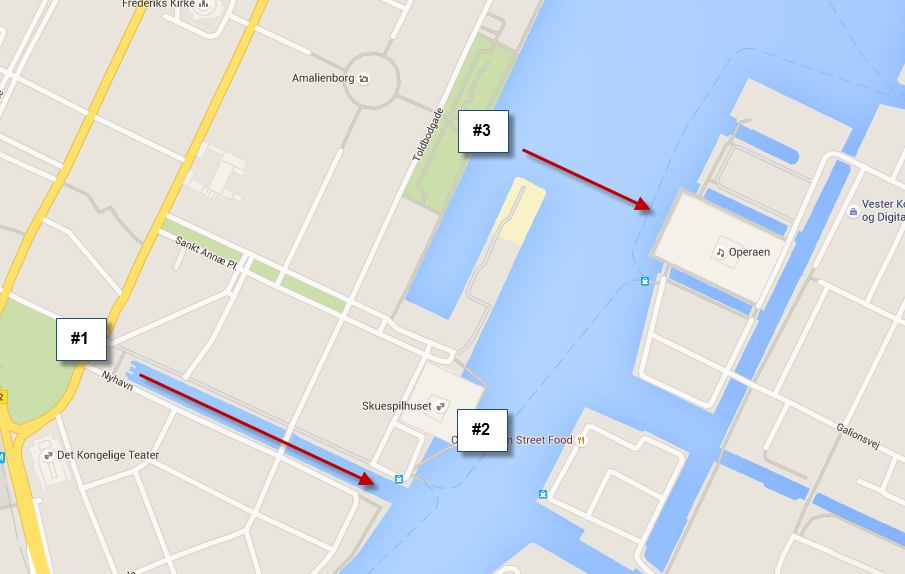 The Canal of Nyhavn does not go from East to West. It goes from South East to North West, more east than South, but absolutely NOT East to West.

The Canal of Nyhavn does not go from East to West. It goes from South East to North West, more East than South, but absolutely not East to West. This fact combined with another fact flunked my intended shot completely.

The Sun rose so far north, that even if I had used an extreme wide angle lens, I still wouldn’t have had it within the frame.

Had I done my homework, I would not only have looked at a map. I would have used an app, to let me know exactly when and where the Sun would get up.

I now use a Sundial app on my iPhone to plan when and where to shoot. It uses the GPS and calculates when the sun rises and sets. You can even set the date, and a location, so you can plan where to shoot the sunset or sunrise.

Had I used the app ‘Photo Sundial‘ (it costs $1.99), I would have seen, that the project that I had in mind, was not at all possible, at this time of the year. 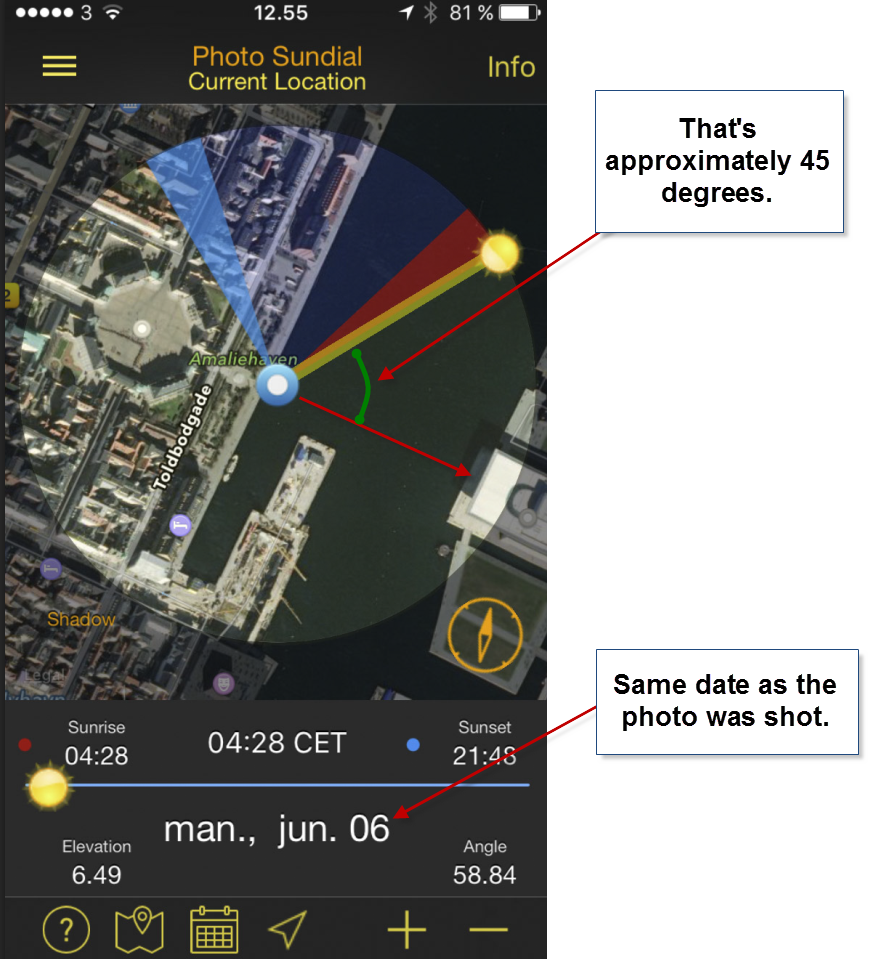 Even an extreme wideangle lens, would hardly have included the Sun.

The ‘Sun Seeker’ is way more advanced, and has augmented reality, which I don’t use, but you could use it.

If I went to The Opera House, I could use the augmented reality viewer, to find the exact date and time to get the Sun rising EXACTLY in the middle of The Opera House. Maybe one day I will do that.

A Sundial app like either of these two is ‘a must haves’ for any photographer. I couldn’t live without them today, and they are an integrated part of my photo planning. Sometimes it means, that I don’t go to a particular location, at rather to another.

The Opera House in Copenhagen. A few minutes later the Sun rises far to the left, way out of the frame. The water is not as smooth as I had hoped. I only used the 3-stop ND filter

The best thing I could have done on this morning was to stay in Nyhavn, and kept shooting as the light changed. The clouds were fantastic seen from there, and I would have gotten a lot of great photos.

I did go back to The Opera House later when I had consulted one of my Sundial apps. And at the end of September, it looked about right.

I went on the 27th of September, coordinated with the weather forecast, and the Sundial looked like this on that day: 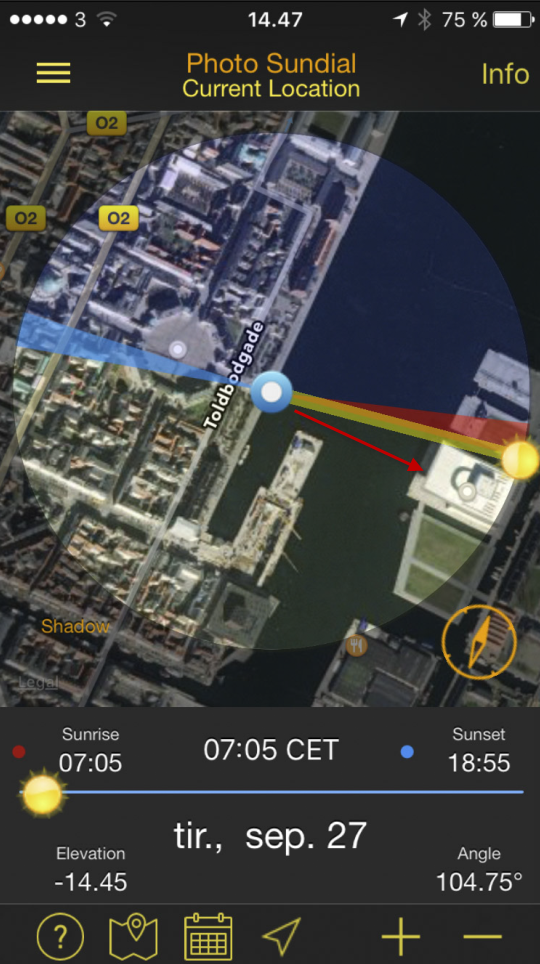 The Sun rises slightly to the left of The Opera House, seen from the other side.

It was not very important that it was precisely behind The Opera House, but just within the frame.

A few minutes before the Sun rises behind The Opera House.

I learned quite a bit on this summer morning, and I have not covered everything. It is from making mistakes you learn. You have to be critical of your work to be able to see your mistakes and learn from them.

Nobody is perfect, but if you learn to see your mistakes, you grow closer to being perfect step by step.

So what did I learn this morning? 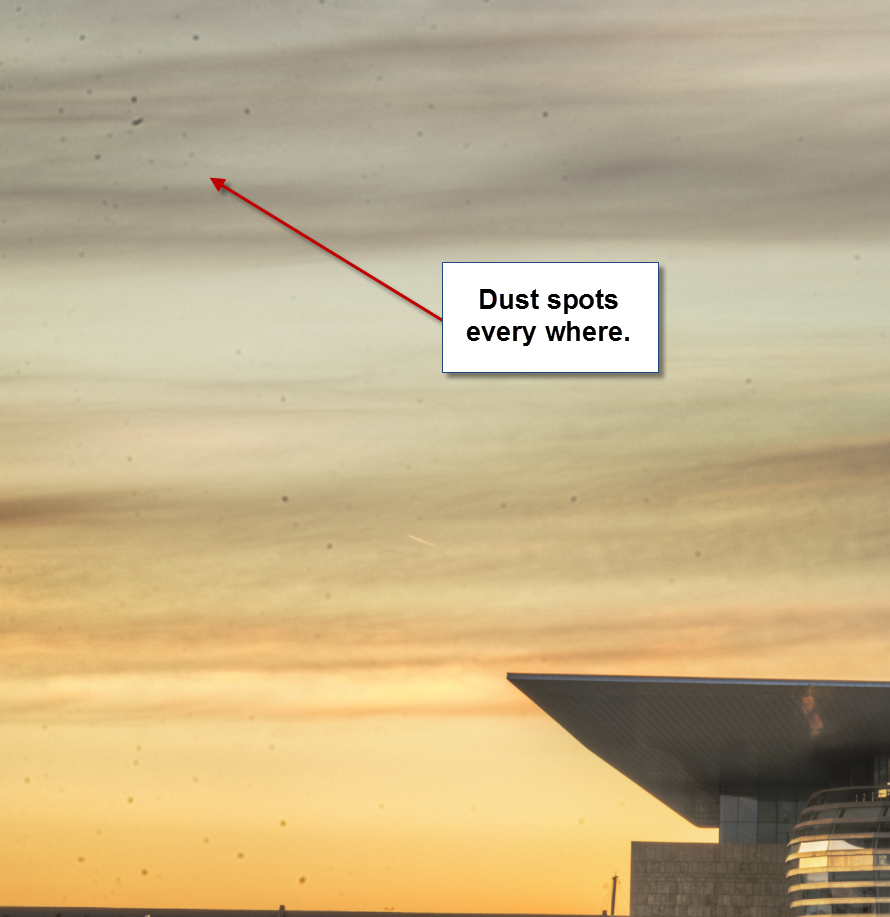 The dust issue from the Nikon D600 was a total nightmare the first year. But it seems to be solved pretty well now, and I have got life time free sensor cleaning.

So I learned a lot this morning, the hard way.