What is dodging and burning anyway?  Traditionally dodging and burning is the art of changing the exposure of your photo locally. It’s a term that stems from the old film days and dodging and burning was a technique you did in the dark room – in the post processing. When you exposed your negative through the enlarger to the photographic paper, you blocked the light, shortly in various places. This way you gave some parts less exposure by moving the object around. This is called Dodging and will the photo lighter in areas the light has been blocked. The burning is the opposite process. After having given a normal exposure, you give extra exposure to some parts of your image. By using a card board card shaped to fit your needs, you could let light pass in the areas you wanted to darkened. Remember that the films were negatives and therefore less light, was lighter (dodging) and more light darker (burning).

In Photoshop there are classic dodging and burning tools. I have used these tools to lighten up dark leaves backlit on a bright sky, but you can do a lot I Lightroom too, in fact I think you in many ways for dodging and burning, Lightroom is much stronger, also because all changes you make are non-destructive. In Photoshop, as soon as you have made changes, you have changed your image.

How to remove and add a light artificially?

My goal with this photo from medieval street in Mont Saint Michel in France, was to create a warm, welcoming night shot of a medieval street to make you wish to be there. When I was done with the first part of the post processing (my classic HDR Workflow Photomatix and Blending layers – you might want to read it here) I felt that it was a bit too dark and did not quite have the warmth that I wanted. I had chosen to make the sky a bit darker than it actually was, to create even more of a night feeling. So I couldn’t change the sky, but the houses and street were very dark, and I could do something about that.

In Lightroom I used the Adjustment Brush for dodging and burning. When using the adjustment brush you have these options: 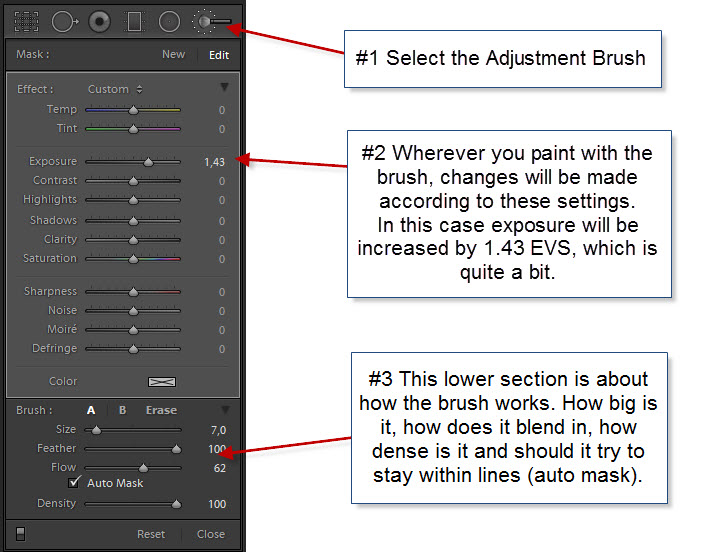 There are many options – more than just changing the exposure as Ansel Adams could do in the black and white film days!

Let’s see how I did some artificial lights in the old medieval village of Mont Saint Michel just off the shore of Normandy. The image below is the before Brush Adjustments, if you hover the mouse you will be able to see the final result: 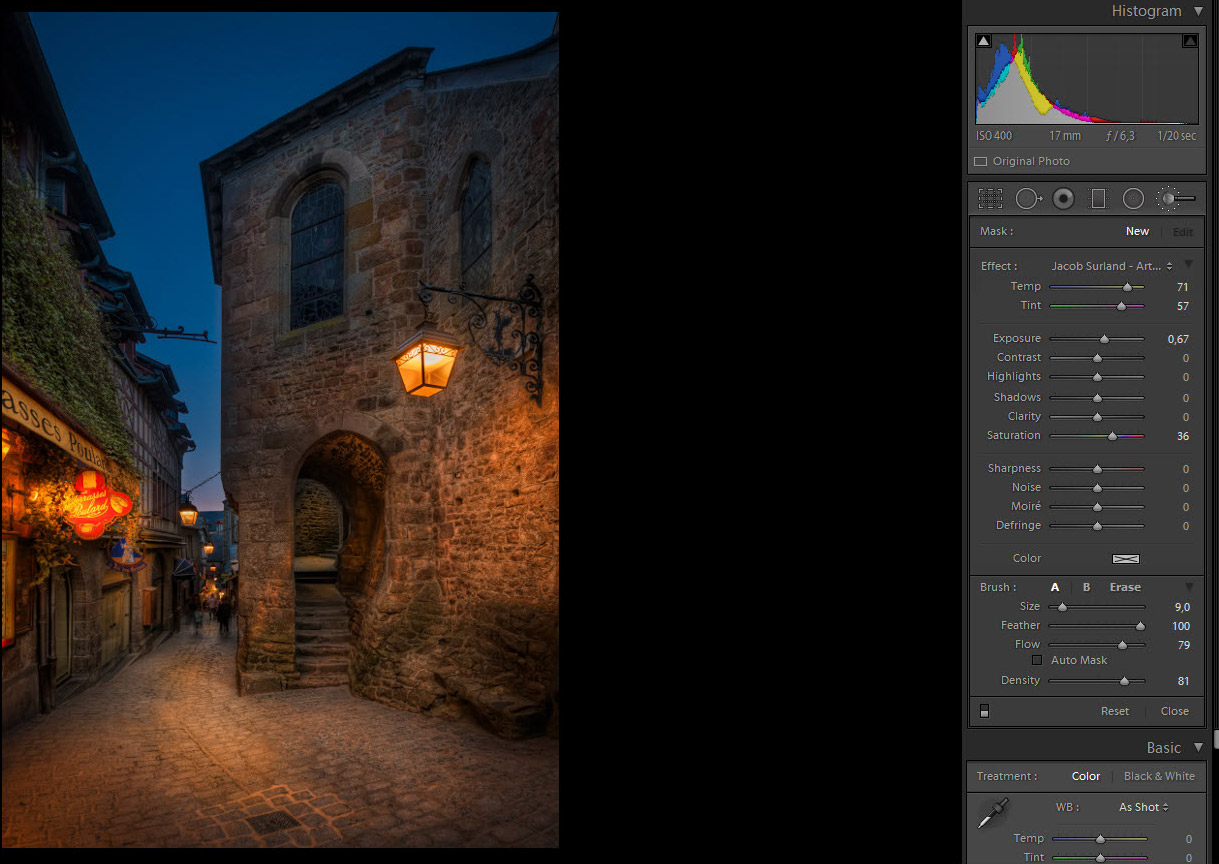 As you can see a streak of light is removed on the wall in the middle of the image. It’s a streak of light coming from a spotlight just outside the image on the left. It doesn’t do anything good to the image. But, I also added some artificial light below the lamp on the right hand side. The eye believes the light to come from a light source and it adds to the mood of the image. Just what I wanted.

But how did I add artificial light to the photo?

I added an artificial light source by dodging (making lighter) an area and in addition to the increased exposure, I also change the white balance by adding Yellow and Magenta. This made it look warmer wherever I painted. Combined with the increased exposure it made it warmer and lighter, exactly the same result as if real light source was shining on the area. You could say that I painted with light. In this particular case I also increased saturation a bit, to make it look real. It is important that the light sources you add, fall into image naturally. These are the settings I used: 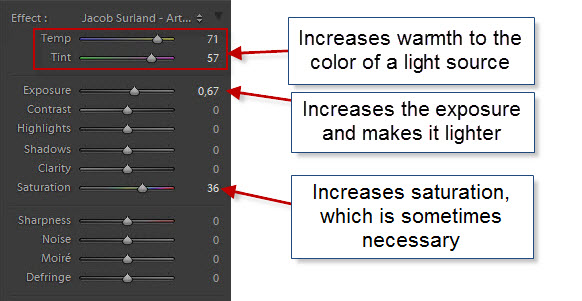 Notice that I don’t go all in on exposure. A too strong exposure will make it look fake – make sure it looks like the real thing.

I removed the light streak on the wall, by doing just the opposite – I burned it (made it darker), but I also changed the white balance. I decreasing the exposure and added Blue and Green instead of Yellow and Magenta. I painted on top of the streak and then adjusted the sliders until it looked just right. That’s burning. Burning can be used to many things, one thing I like to use it for, is to burn shadows to make them even darker or to emphasize a shadow. 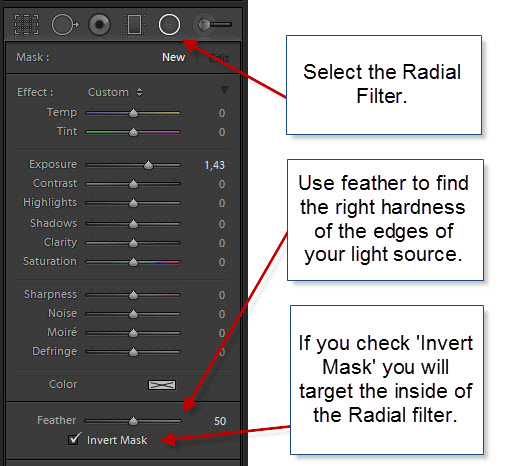 I started by adding one, and then I duplicated and resized it to fit the new area. You can duplicate a Radial Filter by pressing CTRL + ALT (and CMD + Option keys on Mac) and then dragging it to a new location. That will make a copy. Resize the new Radial filter fit the new location to fit your needs. You might also want to change the exact exposure adjustment and white balance settings, because the light is different in the new spot.

In this photo I used the radial filters to add many light sources. Hover the mouse to see the before and after. 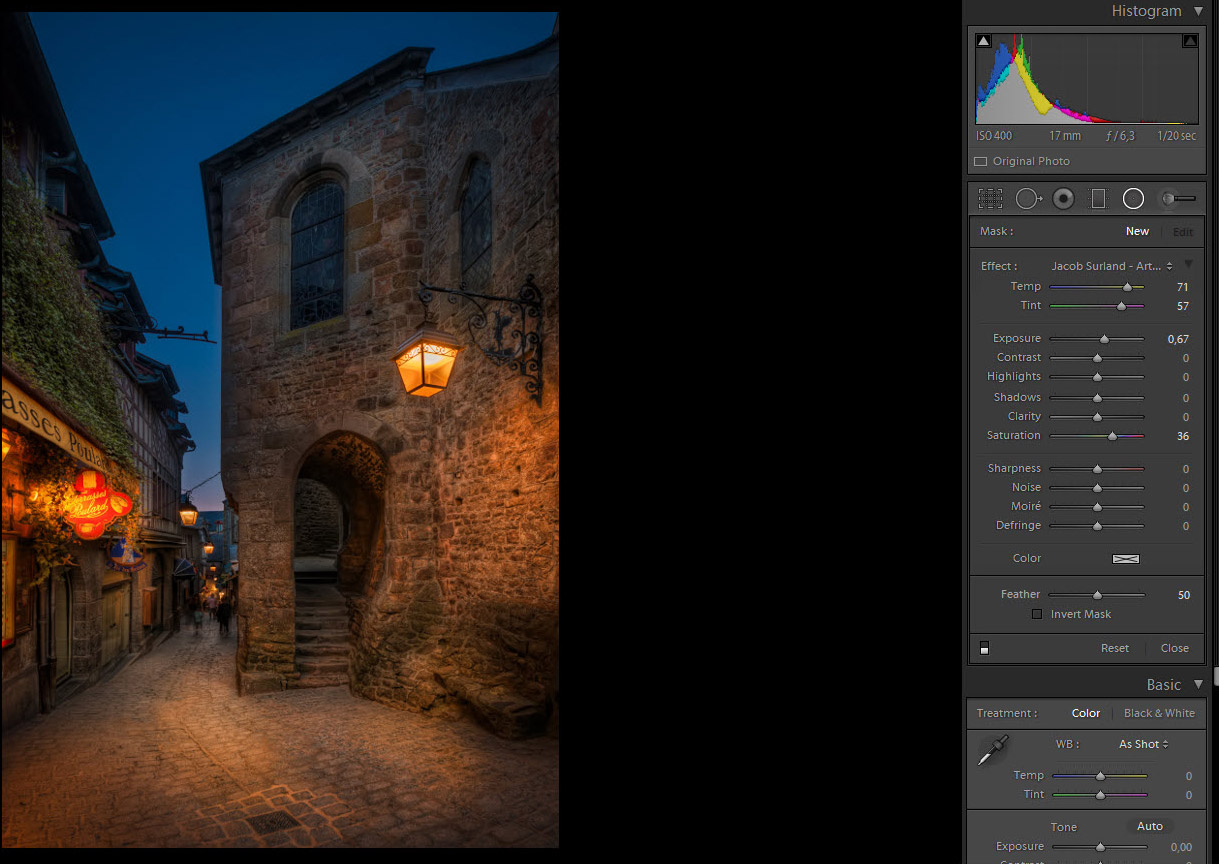 Notice how I have lit up the passage up the stairs and the platform at the far end of the passage. This makes the viewer curious and it seems welcoming. I also added some lights on the street, supposedly to be radiated from the street lamps. Each Radial filter has it’s own size and slightly variations in the exact values. I placed radial filter here: 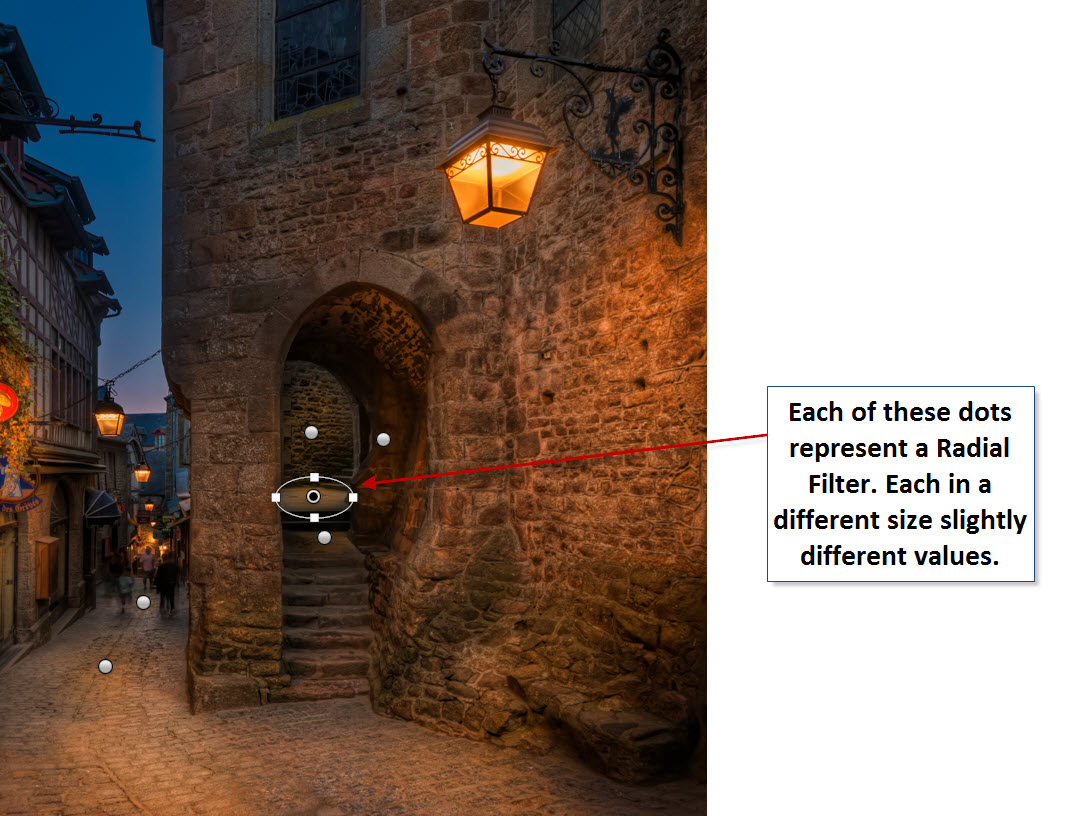 By doing this I have achieved exactly what I wanted. A warm and welcoming image of a street the in medieval village.

Colors affect how we react on an image. Warm colors affect our feelings, it advances the feelings of passion, coziness and makes us feel welcome. By adding a bit of warmth to your photo, you will emphasize these feelings. But it can also give a bit more for the viewer to discover, for the eyes to feast on. You can also do it in more subtle ways and achieve awesome results. If you do it lightly in several places, it will be a subtle but noticeable change.

And this is the two of the four original shots I used ranging from -3, -2, -1 and 0. The +1, +2 and +3 was ruined because a family that had been waiting suddenly started moving as I started on my series of shots. 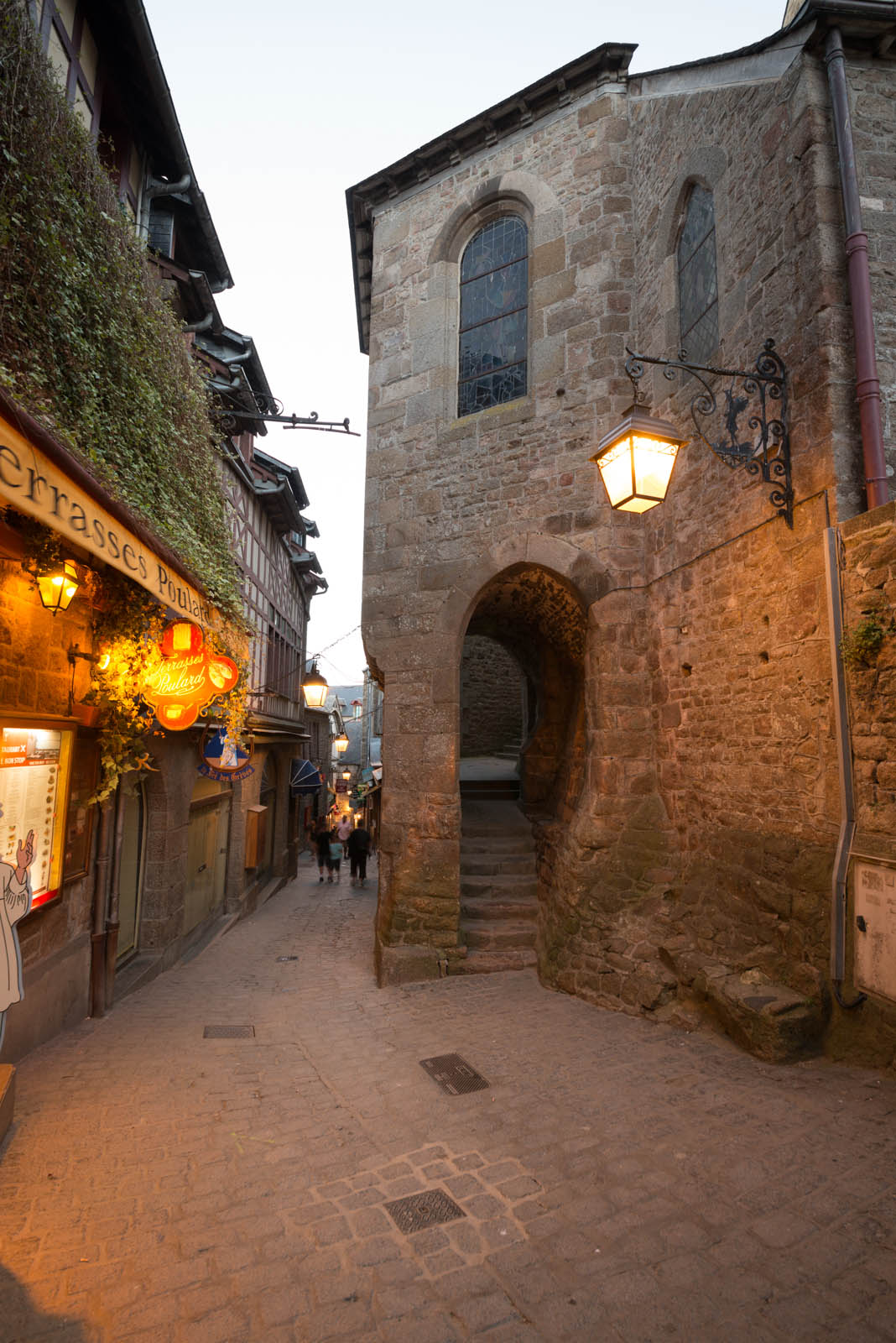 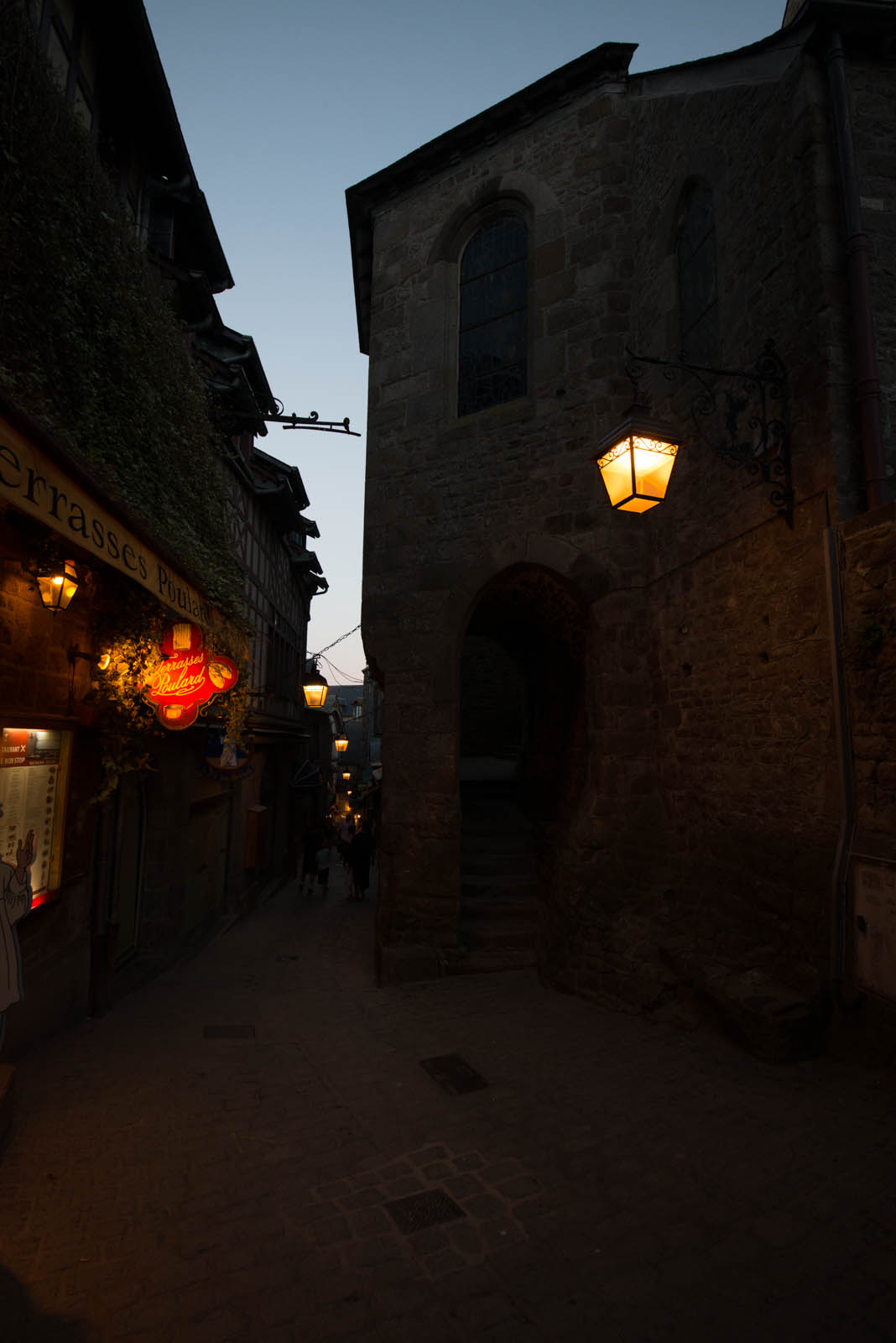 I have been using Dodging and Burning many times and these are just two examples:

Here I burned the shadow of the rock to emphasize it.

and in the next one I dodged the snow, to make it look like the light is shining from the viking ship. All three of these images are made like HDR – which is an advanced photo technique, that you can learn too. If you want to make images like this, I can recommend to read my completely free and very detailed HDR tutorial and that you get your hand on a copy of Photomatix Pro. I can offer you 15% discount by using the coupon code “caughtinpixels”.

2 thoughts on “How to do advanced dodging and burning”