The White hotel on the right is the one from the move “In Bruges”.

Bruges in Belgium is an amazing town with a center that dates back to the middle ages.Some call it ‘Venice of the North’, but I learned that cities and towns with many canals, like to call themselves Venice of this” and “Venice of that”.

I think both Bruges and Amsterdam both in all fairness can be called a “Venice of the North”. They are both absolutely fantastic. Bruges has a lot of canals, and they wind their way through the medieval center of the city. It is a very beautiful place that I can highly recommend coming visit it for an extended weekend.

I got inspired to go to Bruges from the movie “In Bruges” starring Colin Farrell. In the movie, a couple of hired killers go on vacation to Bruges, and the one character really hates it, while the other one loves it. Personally, I found the movie hilarious, but I know other’s hate it. Some movies divide the World, just like cats and dogs do.

Anyway, the great footage from the old center that made me want to see Bruges, and I made a point out of making a one night stop in Bruges on my way to France.

What I didn’t know about Bruges is that it’s called the Chocolate Capital. I just love chocolate, and we did buy some, which, unfortunately, had to eat at once, due to the extremely hot weather.

This photo is from a particular famous corner, next to “Cafe Little Venice”. I have seen many shots from this corner, and this is my version.

I should have used a lens not quite as wide, but there was a light drizzle and I did not want to change the lens, instead I cropped the image. That’s one of the wonderful things about having many megapixels. You can crop quite a bit away, and still end up with a 12-megapixel image, like this one.

I know that some people find that cropping images to be a sin and that you should get it right in the camera in the first place. I believe that if a photo get’s better from cropping it, then by all means crop it! And one more thing, I would rather come home with 10-20% too much of a scene, than 10-20% too little.

My overall workflow, when I process HDR photos is, that I generate a pool of images, based on the original bracketed photos. And these I blend to together into a final image. I usually create a one or two images in some HDR software, usually Photomatix Pro. And these I add to the pool of the original RAW files, these files I load into Photoshop as layers and blend them together.

Photomatix supports presets and I have a few I use for inspiration. Often I use one, and tweak it a little bit until I am happy. I did that in this case.

I processed two versions of this photo in Photomatix Pro. First I made one, a single tone mapped. Saved that, and then I took the output, and put back into Photomatix, and did a double tone mapped image. 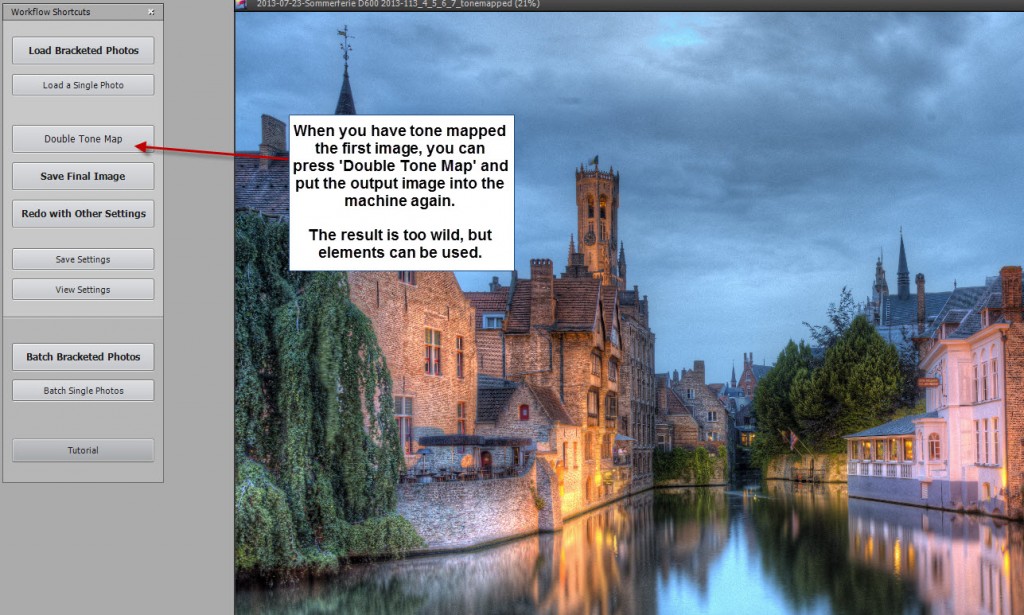 Use Double Tone Map to push the effects, but use it with care, because the effects easily get’s really out of control. 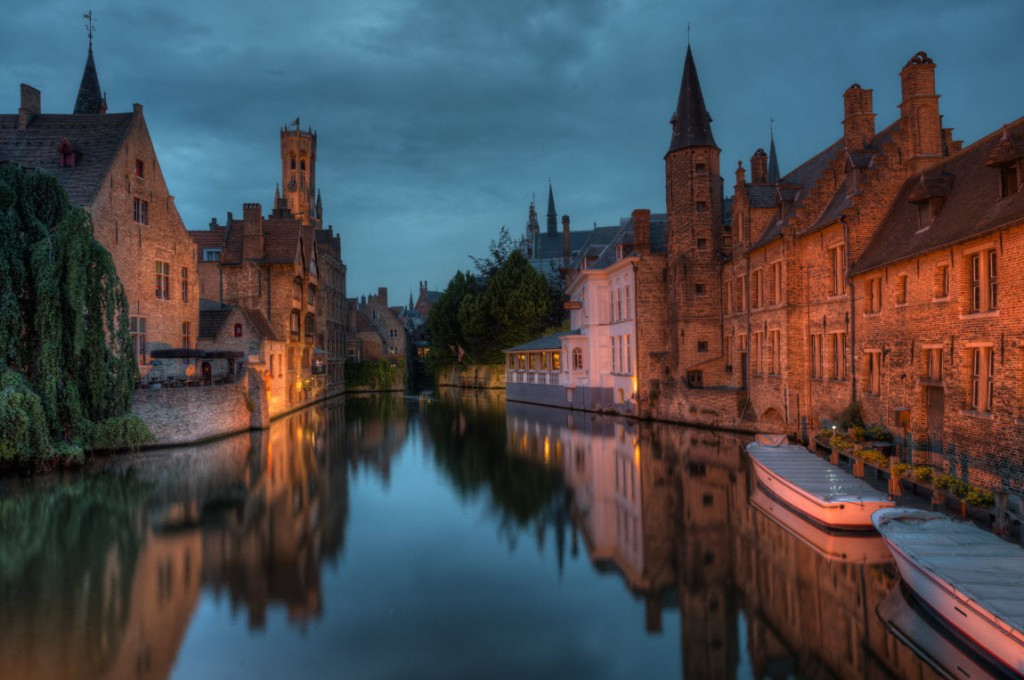 The double tone mapped image usually goes completely wild, and you have to control it a bit, to make some of useful. The trick is to turn down saturation to around mid 40’s, and push Tone Compression to the left and Detail contrast to the right. They are highly potent, and you will have to find the right balance. Sometimes I find that the balance isn’t really there, and just skip making a double tone mapped image. 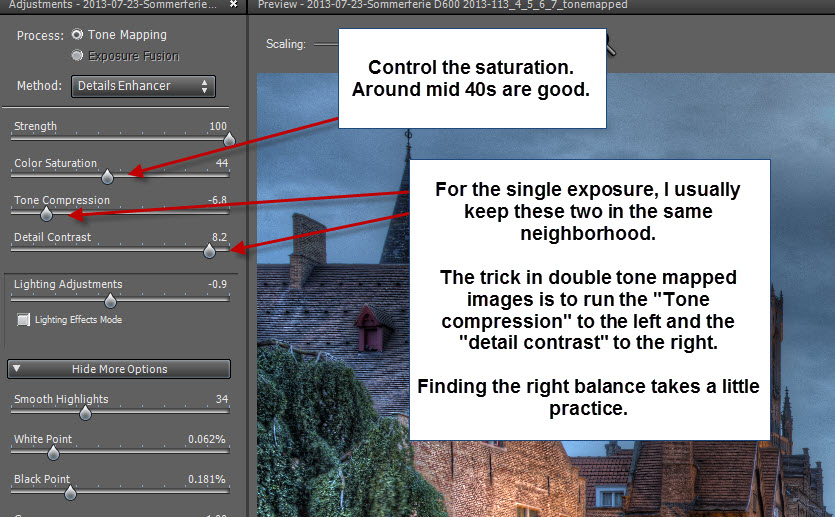 How to get the best result when making double tone mapped images in Photomatix Pro.

When I start to blend my images in Photoshop (you might find my tutorial on layer blending useful) I order them, so that the one I like the most, is my primary image, and it’s usually my single tone mapped image, but not always. 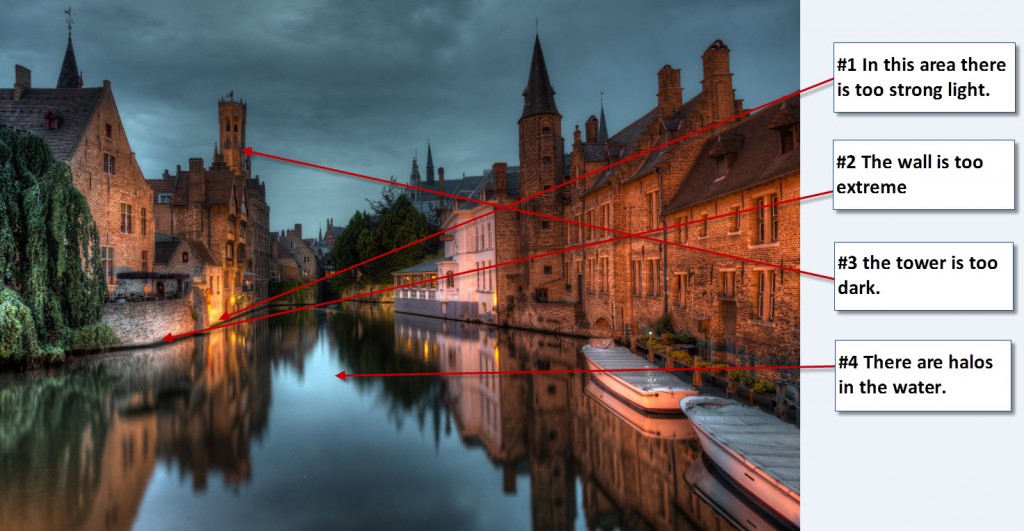 In general, my goal with my post-processing technique is to improve my primary image, and by improve I mean:

Now that I have my (primary) tone mapped image, I look at the issues I face:

#1 The lamps are way too bright. I dial them back a bit by blending in a darker version of the lamp, from one of the other images.

#2 The wall for some reason has gone almost white (blown highlights). This I also change by using a darker version and masked it in 25-50%.

#3 I really wanted the tower to be brighter, so I found a brighter version in one over the over-exposed image and blended that in.

#4 The water is bad – really bad. It has got a nasty halo. You can see that the water is almost black in the lower middle while it’s very bright along the edge of the reflections. This is called a halo and must be removed. I do that by mixing in the water from the 0 exposure.

To fix all of the above-mentioned problems, I use Photoshop. I load all my original five shots plus my two tone mapped images into layers (you might want to read this blog post for a full demonstration).

By using this technique I can remove and fix blown out highlights, by blending either the single tone mapped or one of the originals into the areas that are ruined or just look bad.

The result is, that the buildings and reflections come from the double tone mapped image, primarily, while the sky and the water comes from the original exposures. 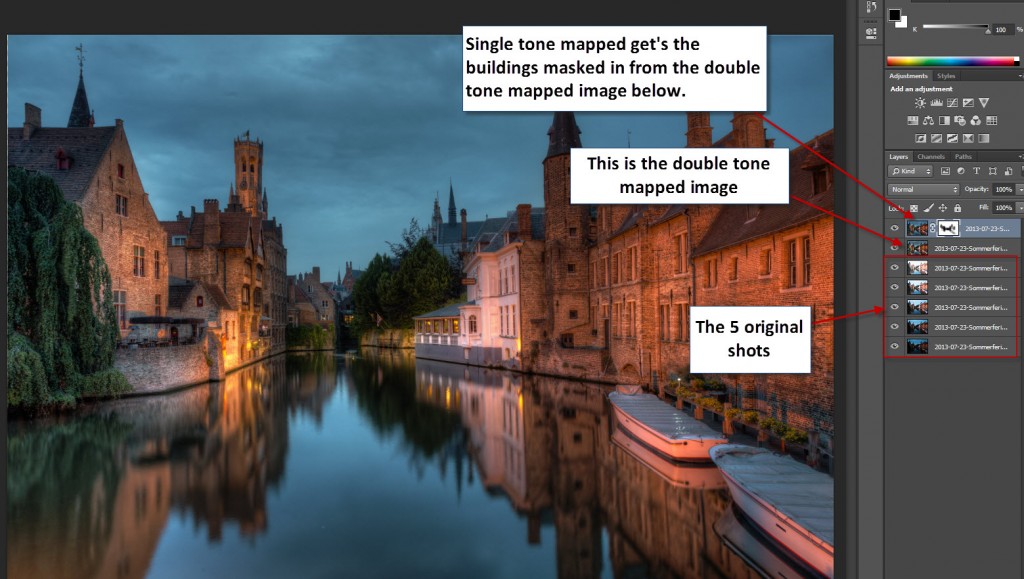 When done in Photoshop I then save the file as a flattened TIFF file and import that into Lightroom.

In Lightroom, I use the brush tool to increase contrast and the clarity in the sky. By doing this, I enhance some details in an otherwise flat sky. The texture is there, it’s just not very easy to see, but I can be enhance it this way. A side effect of doing this, is that the colors get too saturated, I have to turn down the saturation a bit. 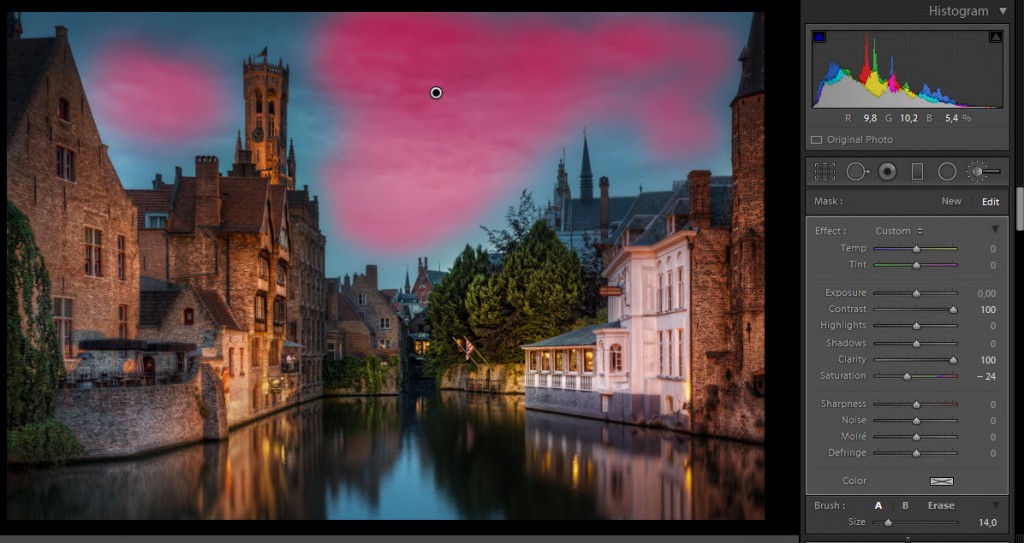 The pink areas are the areas that I painted using the brush. On the right you can see what settings that is applied to the pink areas.

If you find this kind of processing interesting and want to try it out for yourself, you might want to get a hand on a copy of Photomatix Pro. There is a free trial, but if you use the discount code “caughtinpixels” you will get a 15% discount.

You might also want to read my basic understanding of making HDR photos. There’s a lot of things to understand, and a lot of pitfalls. I get around all of these things here.

I also have these tutorials:

Learn how to blend layers using layer masks in Photoshop.