Recently I have been looking through some of my older photos. The last 7 years I have been travelling more than I ever have been doing, and during all of that time I have had a growing interest in photography, without ever really getting to the point, where I thought of myself as an amateur photographer. But during this time I have shot some photos, that I have found to be better than “just snapshots”, but unfortunately not shot with the kind of cameras I carry around these days.

My post-processing skills have improved enormously and I amaze even myself what it is possible to do with an image. Recently I decided, it would be fun to see, what I could recover or restore from before I got great cameras.

I have found that I can restore some of my old photos. The main overall problem is that I have shot most in JPEG (do not shoot in JPEG!! Shoot in RAW) and therefore have too little information in my images. But the problems I can in general summarize to this:

The Basilica Cistern of Istanbul

The Basilica Cistern of Istanbul is an amazing place. More than 1500 years ago, while Istanbul was a part of the Roman Empire, a giant cistern was build. A cistern to contain water for drinking. The construction is enormous 138m by 64m and the ceiling is carried by pillars, some reused from even older buildings.

I didn’t have a tripod so I had to use the rail on the pathways running in and out of the between the pillars. This is the only one I managed to get fairly sharp, but if you look at the original in a 100% crop, you can see that it is far from tack sharp. Taking sharp photos in light conditions in poor light conditions is difficult, because the camera can focus. 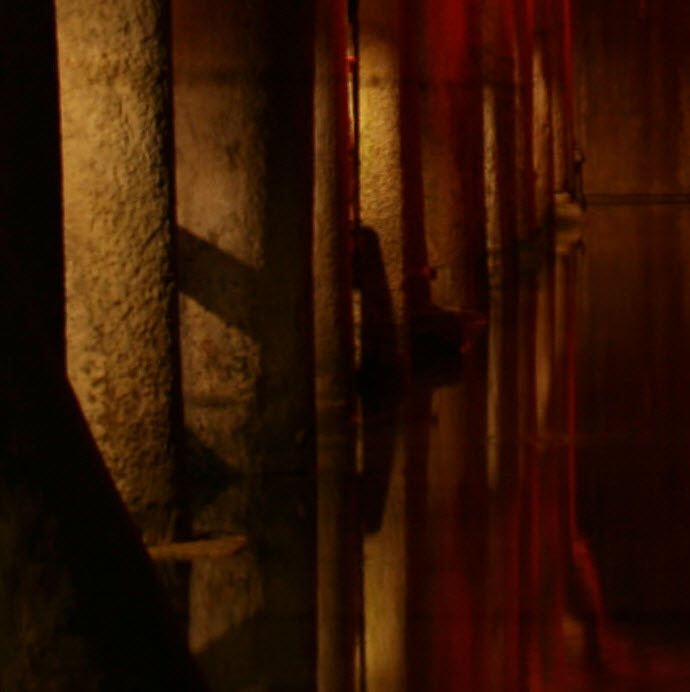 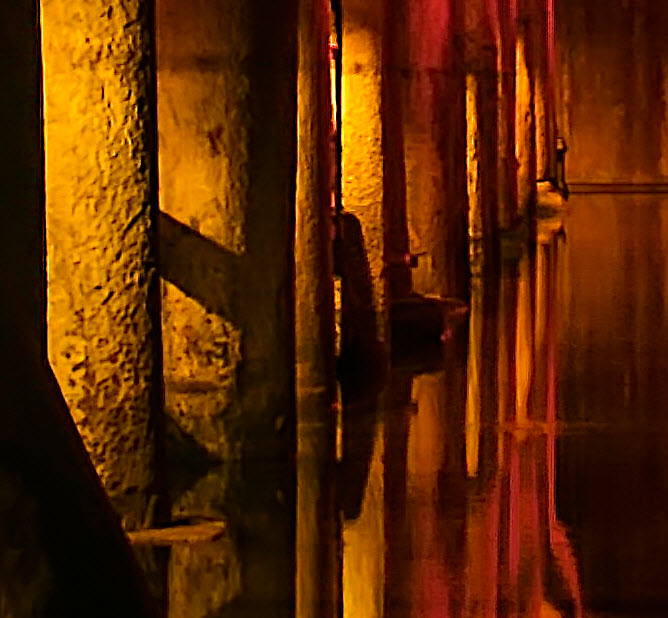 While the photo will never be comparable to one shot with a really expensive high end camera, it has improved impressively and has become a great photo worth publishing. This is original JPEG photo: 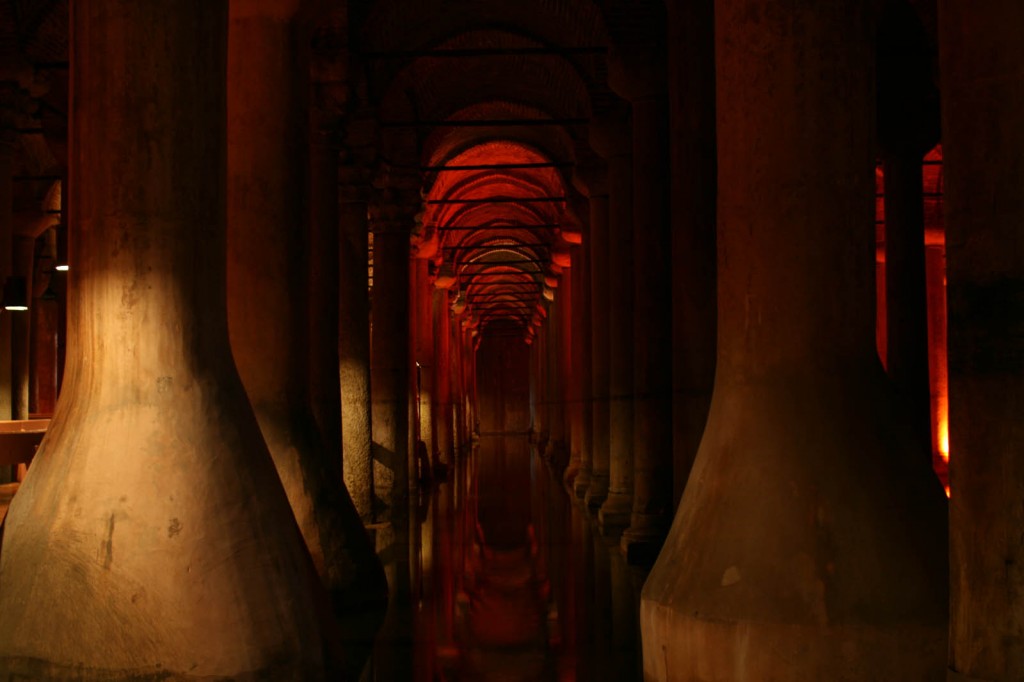 So what did I do to this image? I have done several things.

These are my settings in Lightroom to create the overall look and feel:

Let’s do a walk through of the settings:

Exposure +0.48: The original shot is a bit too dark. I increased the exposure 0.48 exposure step. That makes noise evident in everywhere in the photo.

Contrast +26: Almost every photo I make I increase the photo. It makes them pop a bit more.

Highlights +24:  Usually I let the highlights go in minus, but in this case I wanted more power in the light areas and this explains the stronger light on the pilars on the left side.

Shadows +100: Make the dark areas more bright. Remember this is a JPEG and there is very very little information in the dark areas. So noise reduction is mandatory afterwards.

Whites +29: This increases the point of how bright the image is by stretching the brightness. If you press ALT while you move the slider to the right, you can see when you start to get blown out white areas.

Blacks -10: It is good to have some black in your photo to make it work. If everything is gray’ish, the photo will be dull and flat. This also goes for HDR photos – there has to black to create depth in the photo. I have increased the dark areas, compensating for having set the ‘Shadows’ to +100.

Clarity +45: Clarity is potent slider. What it exactly does I can’t explain, but it adds some kind of contrast and it does at it says, it makes things more clear. In this case the photo is a bit unsharp and soft and by using the Clarity slider quite a bit I can ‘un-soften’ the photo, which is needed. Careful with the Clarity, it can very easily be overdone.

Vibrance +100: Wow – I think that is the only time I have ever used +100. Vibrance works a bit like Saturation, except that it only works on some colors. Skin colors (red and pinks colors) are less affected. This photo almost only has red colors and therefore Vibrance only has a little effect in the orange on the pillars.

Saturation 0: The photo has plenty of colors, no need to add them.

It is a complete section of it’s own. The more I use Lightroom the more I use these sliders to finetune the colors of an image. In this case I found the the Red was too intense, and I lowered the saturation of the red.

The photo is a bit unsharp and does require sharpness. I add some sharpness here, but I also add some in Noiseware later.

I add some noise reduction. If you are not sure, what noise is, it’s grain in your photo that is generated digitally by you sensor in you camera. The more expensive your camera is, the better it handles noise. This is shot with an entry level DSLR – an old one too, which makes it very prone to adding noise to the images. This is the noise in my image (click it up to see the full size): 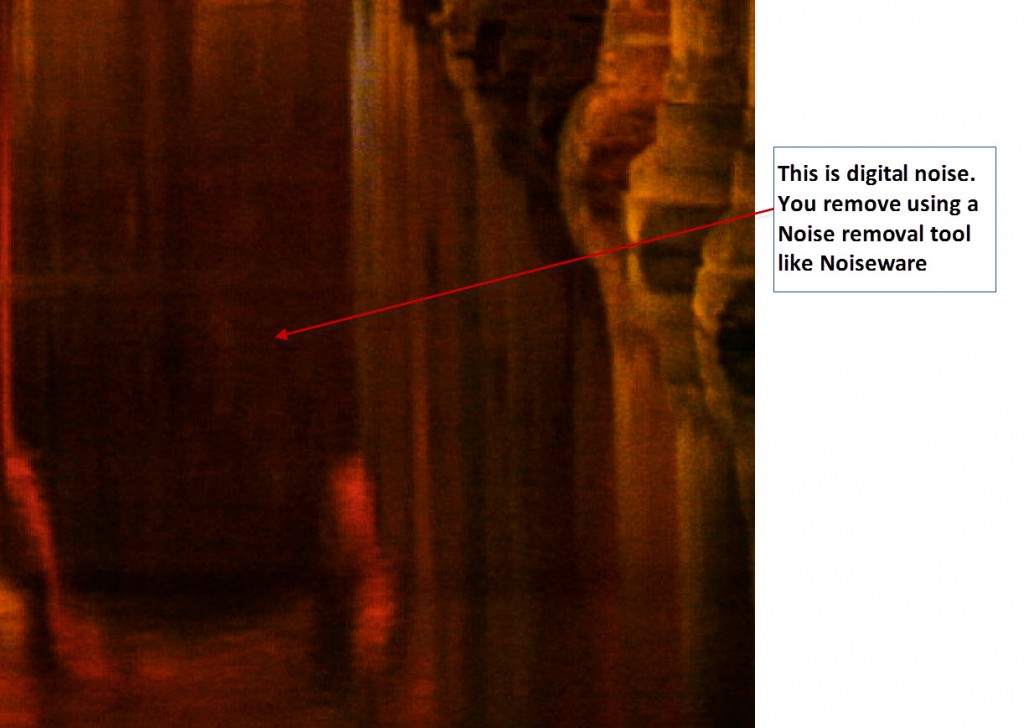 Some go against cropping and argue, that it is better to get the photo right in the camera. I disagree. If a photo gets better by cropping, do so. The only problem I see in cropping is that you get a smaller image, and if you want to print it, that might be a problem. This photo is shot as a 10 mega pixels, but I’m left with only 5.1 mega pixels. This is better than an unusable photo, right?

Reducing the noise in a photo in a third party tool

When you shoot photos in poor light conditions your camera will most probably generate digital noise. There are many tools that you can use to remove digital noise. I have used several. There are Noise reduction in Lightroom, but it is not the most optimized tool that I know. It takes away too many details, but I find that Noiseware from Imagenomi really does a great job of reducing noise and keeping the details. But it also does a quite efficient sharpening. A side-effect in reducing the noise, is that you get a softer photo and therefore need to add sharpening – and having it built into one application I find very convenient.