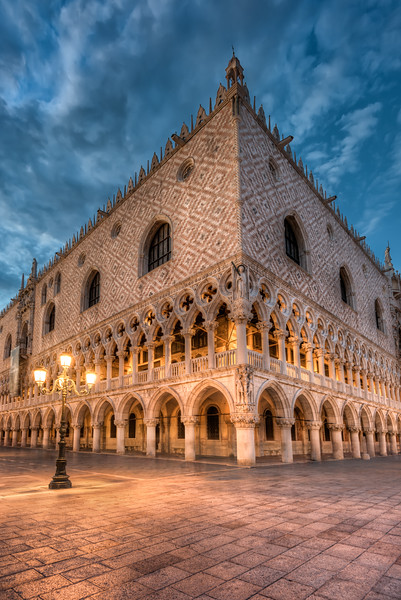 The Palace of the Doge in Venice is a master piece in detailed architecture. This photo is a 5 shot HDR made using Photomatix Pro.

I had to wait quite a while to get a photo of the Palace of the Doge in Venice without too many people. And by using a fairly long exposure, I have been able to merge several photos and get rid of the few people there. A family kept standing watching the beautiful clouds, shooting photos of each other. And when they finally moved on, another group stopped.

Two principles are good for getting rid of people. One is shoot several shots, and waiting long enough for people to move between the shots. The second principle is to have long exposure times of 5-10 seconds at least, which will make people almost disappear. My longest exposure was 10 seconds.

Even if I had got rid of most people, I still had a lot of cloning to do. No less than 11 dustbins where within the frame.