The colors of the roof and walls keep changing colors, to simulate day, night and the weather.

I knew that the ‘Muséum national d’Histoire Naturelle’  would be something special, but I was still blown completely away with the beauty of this enormous old room.

I arrived in the midst of a tropical thunderstorm. The roof changes colors, along with the one wall, to simulate the weather. It can show lightning, day and night, and a rainbow … at least that was what I saw, during my 1,5 hours I had there until it closed. I didn’t even get much time to look at the exhibition, but that looked really awesome too. This place I would require a day, to do it full justice I think.

I could just squeeze in visiting the Museum between I hung up my artwork at Carousel du Louvre, and the VIP grand opening later in the evening.

About the processing of this photo

This photo is shot with a Sony A7R using my metabones Nikon adapter attached with my 16mm Nikon Fisheye lens. The fisheye is obvious. I used a fisheye in this location, to got something out of the ordinary classic shot from this museum, and I think I managed to get that. At least, I have never seen anything like this before.

I shot it at an f/stop somewhere in the middle. One of the drawbacks from using the Metabones adapter for Nikon is, that no EXIF information is transferred from the lens. But I know I had the f-stop somewhere in the middle, my guess is f/8-f/11. And then I had the camera at ISO 100 and the longest shutter speed was 5 seconds. This allows me to blur most of the people fairly much away.

I used my standard processing workflow for this image. I processed it in Photomatix (you might want to see my tutorial here), and afterwards i took the three originals along with the output from Photomatix into Photoshop and blended it to this final result. These are my three original unprocessed photos:

One of the important things, when you shoot a photo symmetric like this one, is that symmetry is as exact as possible. I could spend a long time while shooting, to get it exactly right in the camera, by shooting, checking and re-shooting. I work in a different way. I need to be ‘close enough’ to the final framing, but I do not mind, doing a final more exact crop at home on the computer. This way I get more time, to do more shots, instead of working one composition into death. This might be a different way, than others work, but I like it that way. Of course I sometimes get stuck, if I can’t get a “good enough” result quickly. I hate getting home with something, that I cannot use.

I am far from puritan about ‘getting it right in the camera house’. I see no point in doing that, it would only require more time, at each location, giving me less to time, to do more compositions.

In Photoshop I first got an “overall” good blend of the tonemapped output from Photomatix, and the three original images. Then I added some effect, by using Topaz Adjust. Afterwards i used two of the original shots ones more to fix or improve very specific areas. 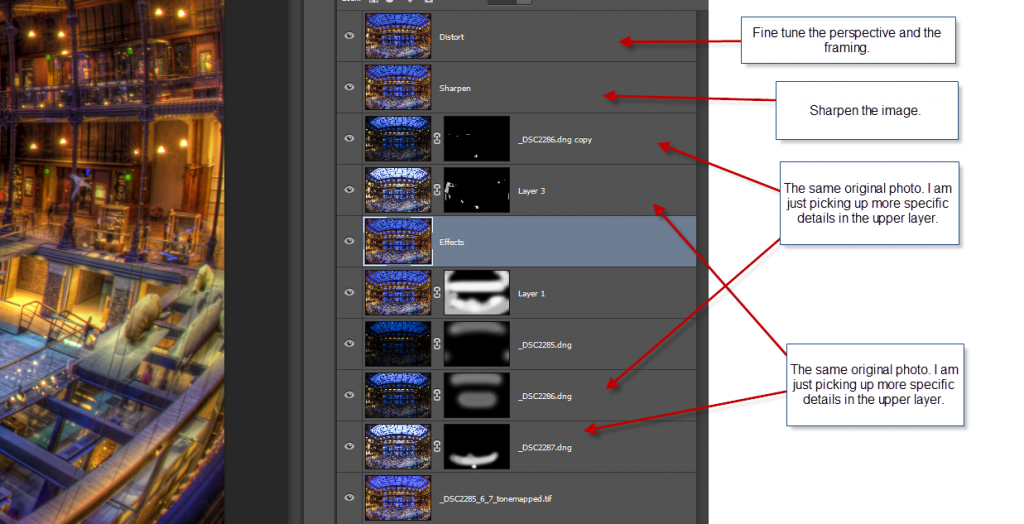 How do I determine what ‘needs to be fixed’ in an image? What I get out of Photomatix is next to NEVER a final image. This I know, and I just have to look for the ‘problems’ with the image from Photomatix. There is always something, that doesn’t look too good. Something that is too extreme, a nasty halo or a to hard contrast. How do I spot that? I look closely at the image, both in a smaller thumbnail seized image, and in a closer to 1:1 version. But in the end it comes down to a mix of taste and experience/practice. The more images you have processed, the better you get at doing this. In the beginning, this was pretty much a lot of guessing work and less qualified work. Most of this early work, I have withdrawn from my public stream. The more images you process, the better you get at it, and some of the ‘problems’ gets so obvious to fix, that you hardly think about it.

In this particular image, I first got the ‘basic’ image, by blending the Photomatix version, with the three originals. Then I made some effect using, Topaz Adjust, and afterwards I fine tuned the image, by picking some very specific areas from the original images, to fix some problems.