A Mound, stars and sunset.

I have had the photo of the beautiful clouds and the old rock formation on the mound lying around for a couple of years. Once in a while, I have tried to process it, but I always found that the photo lacked something.

A couple of days ago I got the idea to mix in some stars above the clouds and then darken the clouds some. That did the trick and finally, I had a finished photo.

In a way, it is a bit like my “Time compressed” photos, as I am portraying photos from two different times of the day, but the difference is, that these two are not shot on the same location. The stars are from Norway and the clouds and ground from Røsnæs in Denmark.

If you have a photo that is lacking something, don’t give up. If you have some quality, but just a missing piece, try to solve that piece. I find such task immensely fun and that is where the creativity sparkles.

To get inspired, look at other photographers photos and suddenly you might find the muse that you need.

Kastrup Søbad which is located in Greater Copenhagen.

This location in Greater Copenhagen I have had on my to do list for quite a while. This particular day, I wanted to test my Lee filters on my Sony A7R using the Sony Zeiss 24-70 f/4 lens. Normally I use my filters on my Nikon camera, because they have the 77mm size that fits my adapter ring. But I have bought a 67mm adapter ring and had a 67mm -> 62mm step down ring, which made it possible to use my filter kit on the 24-70 f/4.

I had an upcoming UK trip and I seriously considered leaving the D800 at home, and stick to my Sony’s, due to the much smaller size and a little more flexibility on the lenses, by carrying only one system.

As it turned out this evening, the Sony A7R did very well with the filters and long exposures. This photo is a 79 seconds exposure and I have no complaints about the quality of the image.

For the shoot I used a 6-stop Lee filter, also called The Little Stopper, and then a 2-stop soft ND-grad.

The Sea Pool is lit until 2300 hours, which I didn’t know. I arrived with the lights on, and I thought it was fantastic with lights on. A bit difficult to shoot, due to the extreme dynamic range, but a challenge. Then suddenly they turned out the light and I thought, that that was that. I shot two shots more, mostly because I just found a composition that I liked. And I shot them without the lights. This being one of them.

As it turned out the ones without the light are by far the best. Learnings to take with me: Even when the moment seems gone, don’t despair, you might get something else, maybe even better.

Waking up in Copenhagen.

There is something about panorama photos or stitched photos that fascinate me. It’s a bit like a fisheye lens, that shows the world in a way you can’t see with the naked eye.

A panorama photo serves multiple purposes seen from my perspective. The obvious reason is to include more of a scene in one photo, in a panoramic way.

Another reason is to compensate, for a missing lens. If you haven’t got that really wide angle lens in the bag, shoot two less wide angled images, and stitch them when you get home.

END_OF_DOCUMENT_TOKEN_TO_BE_REPLACED

Rubjergknude Light house stands in the middle of a moving sand dune. The surrounding houses lies as debris around the light house. It is predicted, that it will fall into the sea in 10-15 years.

This Weekend Post is about, how I prepared this image for a huge print.

When you have to prepare a large print, you must be more careful, than with a smaller print. Even small irregularities and dust spots will be easy to see and can potentially ruin the whole print. And a larger print is more expensive.

So time spent preparing your photo, is time well spent.

Recently I had to prepare a 130cm / 52 inches wide print for an exhibition at Photographers Lab in Copenhagen, and some problems showed themselves.

END_OF_DOCUMENT_TOKEN_TO_BE_REPLACED

The ‘Skerpi’ is a house made of sticks, and put on wheels. The gourmet restaurant ‘Koks’ from the Faroe Islands has this as a pop-restaurant in Copenhagen these days.

For the past week, I have been playing around with AuroraHDR by Trey Ratcliff and Macphun. It’s one of the latest products for creating HDR photos, and I have been pretty excited about getting to know it.

This article covers my first initial impression of AuroraHDR. My overall impression is positive. There are lot’s of good stuff, but there are also a couple of bad bits.

Let’s start with one of the bad bits. It’s Mac… Only… However, Macphun is working on a Windows version, but there is no official date for this yet. Maybe they will brand it under ‘Winphun’? Probably not!

Anyway, I am or was a Windows user, but I do have a MacBook Air 13″ from mid-2011, equipped with an i7 1.8 GHz and 4Gb ram. It was the most powerful MacBook air back then. And this Mac has been my test drive computer.

I think that has been a good exercise and I can give a couple of additional input because I used this older computer.

I picked a series of bracketed photos from my latest photoshoot. I exported seven exposures from Lightroom as DNG (Adobe’s device independent RAW format) files, as I always do, and dragged them into AuroraHDR.

END_OF_DOCUMENT_TOKEN_TO_BE_REPLACED

I went chasing the sunset one day a couple of years ago. I went to this place, called Bastrup Castle Ruin. It’s right next to Bastrup lake and it’s not that far away, and yet I have never seen it. It’s not always you get around, to go to see what’s close to home.

Bastrup Castle Ruin used to be one of the strongest fortifications in northern Europe around 1100. It had an impressive 6m thick walls. However, there s not much left of it, and I went searching for something else along Bastrup Lake, and I came across this little boat house, with an old boat inside.

I wasn’t too lucky with the light, though. The sunset didn’t really work my way, and I never did finish processing any of them. I tried a few times doing this boat house, which I liked. Not until I tried this ‘Orange’ look, things started working my way.

This is the before photo: 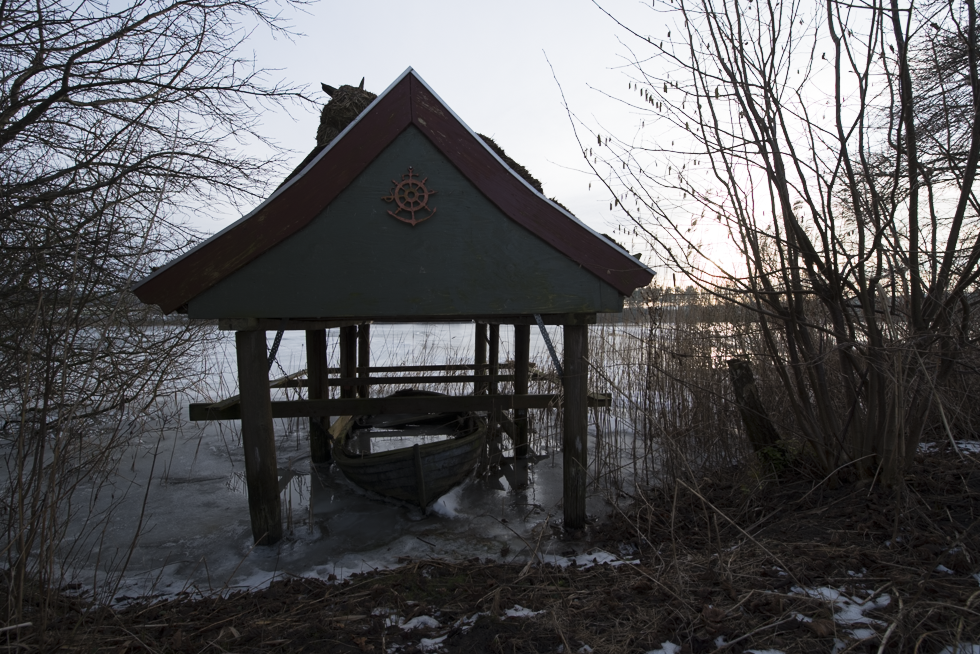 As you can see something quite different. Because I am shooting right into a pretty strong Sun, I have shot from -5 to +3, that is 9 shot’s, and merged them in Lightroom, using the new’ish HDR merge. I only normally only use this one, if I do not want to make any tone mapping. I often want to do tone mapping, because it opens up for a lot of creative processing. In this case, however, the orange look is created within Lightroom.

The Orange Look presets will be available in my upcoming Lightroom presets.

Fiskettorvet is one of the Shopping Malls in Copenhagen.

Fisketorvet is one of the shopping malls in Copenhagen. In the beginning it was quite lonely, on the old harbor, but other houses, both residental, and offices has been built around the shopping mall. And now, it is a pretty cool area, especially for photographers!

This one is shot literally with the camera standing on the ground. It’s a amazing how clear a reflection in the water can be. I only had to fix a few issues in the reflection.

One day, at a conference I sat and played around with my camera. I had my 50mm lens on, and I shot photos of various slides from the presentation. Suddenly I noticed, that if I pointed the camera, at my iPhone, the iPhone would be completely blurred, but what it reflected was 100% sharp. Later I took this photo, which once again is a reflection in my iPhone shot real close with a 50mm lens. 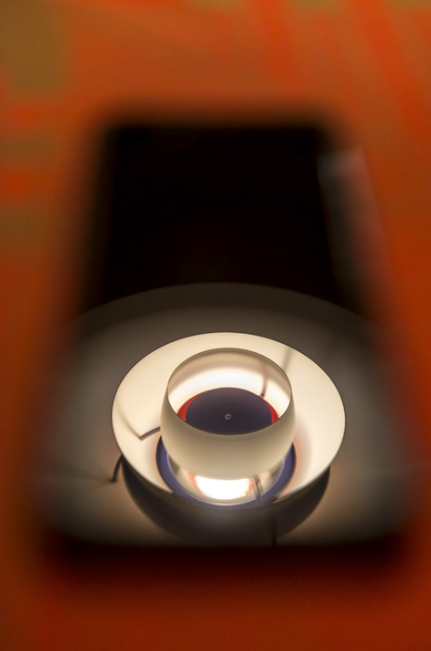 Closeup photo of an iPhone. Notice how out of focus the iPhone is, and how sharp the object reflected is.

I really wondered what happened and later on the same day I learned why. The glass works as a lens, and for that reason you have to focus from the distance of the ‘lens’ (the glass of the iPhone) to the subject. The iPhone and the camera being very close to each other makes this distance almost the same. And this also explains, why you can put your camera literally on a poodle of water, and reflect completely sharp.

Nyhavn (New Harbor) is a beautiful place in Copenhagen.

On this particular morning, I saw the craziest wild colored sunrise, but I never saw the Sun itself. I saw it shine on the city behind me, but before it got clear of the horizon, it disappeared behind clouds. Really weird. This photo is from Nyhavn in Copenhagen. While Nyhavn means New Harbor, it is an old harbor today, only there used to be an even older harbor.

Today Nyhavn is the place to go, for a cold nice beer and a nice meal on a summers day. Not only tourists go there. If the weather is great, the locals will go there too, for a beer after work, or just to hang out.