How to create dreamy lamps in a night shot

The shot is one from the shelves, and I don’t remember the exact goals from, when I shot it, I guess I thought this ancient looking construction, with skyscrapers in the background, looked cool.

But processing wise, I had an idea I wanted to try out, a special processing technique on the lamps. It was an idea I got when I saw another photo. I often do that. See something and think, that looks cool, wonder how that is made. Sometimes it takes a while to figure out, at other times, it comes easy. This is one had been lying around in the back of my head, and then one day, an idea struck me as lightning.

Before this gets too abstract, let’s get down to what it’s all about. I had seen this photo having street lamps in the dark. And I really loved these lamps, they looked just awesome. And one day, I came by this photo from Chicago in Lightroom, the word ‘dreamy lamps’ popped into my head. I was convinced I knew how those lamps in the other photo were made.

The idea works on night shots including lamps, like this one from Chicago does. As soon as I realized, that I thought of the lamps, as dreamy, I instantly knew I had to try to apply Orton effect on the lamps, maybe even a lot of it.

Afterwards, I went back to the photo, that originally inspired me, and I saw that, what I had remembered about the lamps, really was wrong. It was something, my mind remembered, and I had just done my own “invention” (probably not the first in the World to do it, but at least independently).

The principle I thought I would use, was  to do a double Orton effect on the lamps, locally, to make them dreamy.

What is the Orton effect? I have a longer post on it here, but let’s just repeat quickly.

Create a flattened layer, without delete the layers below. You can do this by pressing CTRL + SHIFT + ALT + E (or on a Mac CMD + SHIFT + ALT + E). This feature I haven’t found anywhere in the menus, but I use it all the time.

Now duplicate the new ‘flattened layer’. You now have two identical layers on top. Change the blend mode on the top layer, to either Overlay, Hard Light or Soft Light. Sometimes ‘Screen’ can also be used, but I mostly use Overlay.

Go to the lower layer, and blur that using Gaussian blur. You can see the effect change as you change the blur level. Find a level you like. This effect is called Orton effect.

I then place these two new layers in a Group, and a black mask to this group (or a white, and invert it (CTRL + I or on a Mac CMD + I). I can now paint in what amount of Orton effect I like, in particular around my lamps. 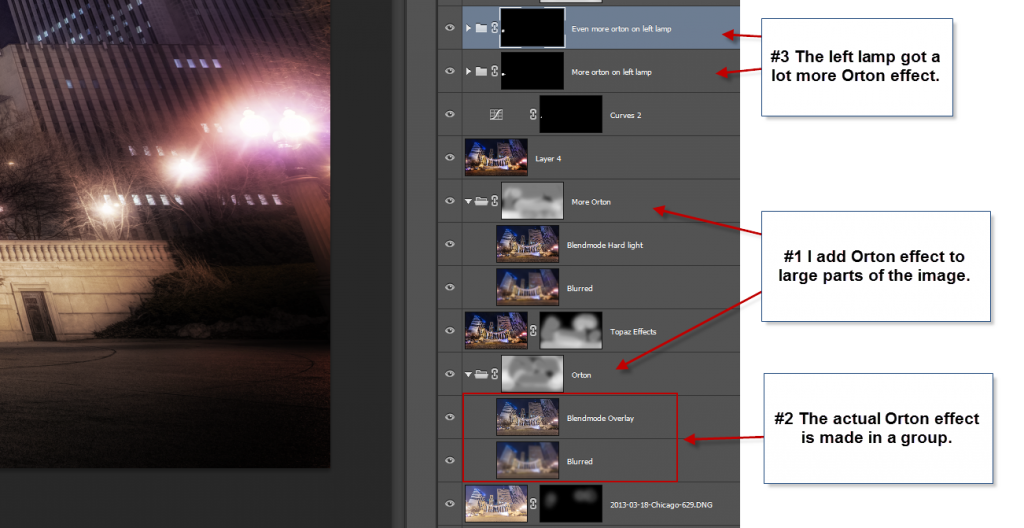 As you can see I applied Orton effect on the rest of the photo too, but just to a lesser degree. It turned out, that strong Orton in a local place, did not work out too well. It had to be used a bit more general to look good. But I did get the lamps that I wanted, even if it was different from what I had got inspired from.