How to make something out of nothing 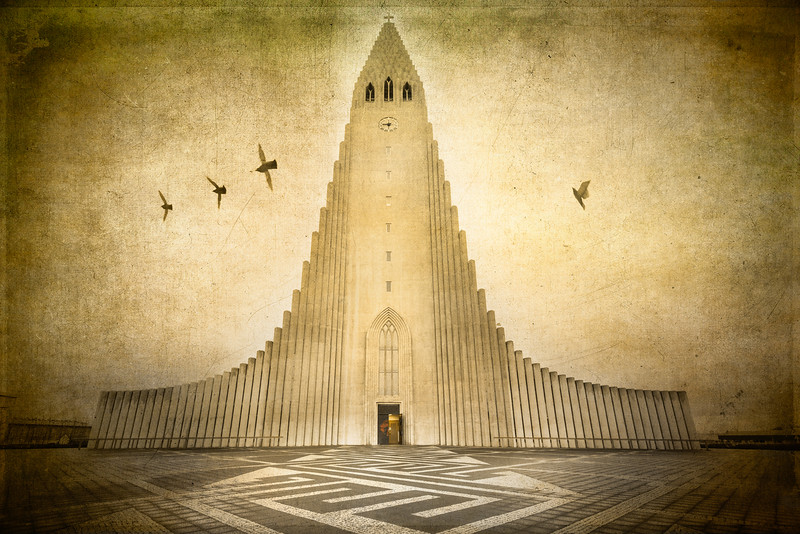 Birds flee from the Church of Hallgrim. In Danish Hallgrim means ‘half ugly’, hopefully, that’s not why the bird flees. The Church is named after a poet from the 17th century, and perhaps he should be happy, that he wasn’t completely ugly, but only half ugly.

I have a bunch of photos in my library, from great locations around the world, but because the light wasn’t right, I have to add something, to make it into something. This image is an example from Hallgrims Church in Reykjavik in Iceland. A fantastic and beautiful modern church. I shot the photo on a gray and rainy day. The sky was gray as it gets as you can see in the original unprocessed image:

The process I went through, was first to do some basic cloning and perspective correction. Because I tilted my wide angle lens a bit upwards, the church is leaning a bit too much. This I fixed until it looked fairly natural.

Then I cloned away a couple of lampposts, some rubbish and the sign at the entrance of the church.

The making of the image

Now I was ready to make the image. The first thing I did was to enhance the pattern formed by the tiles in front of the church. I did this, by making a curves adjustment layer. To control the contrast a bit more, I put a copy of the image on the layer mask. You can edit a layer mask if you press ALT (or Command on a Mac) and click on the mask. All I did was to paste in the original image on my mask. This way the curves tool, will target primary the brighter parts.

When I was happy with the contrast in the tiles, I moved on to the next step, to add some birds. The image lacks supporting characters. The Church is the primary character in my story, but it lacks some interesting story, and birds can add just that.

Unfortunately, the Icelandic birds were asleep or took cover of the rain (as should I have been). Instead, I used some birds I shot in front of Stephansdom in Vienna at a different time. Hundreds of birds took flight, just as I passed by. For this image, I handpicked four that I liked and placed them exactly where I wanted them, to tell a story of fleeing birds.

The next step was to add textures. This is a sort of experimenting process. Some textures work great with one image, but not another. I added a texture and tried the different blend modes, added a mask and painted some of it out. If I didn’t like the texture, I removed it, and found another one.

In general my goal was to add less texture to the church, than to the sky. The sky really needed something, but the church should be recognizable. I kept adding textures until I was happy with the result. For each texture I tried changing the blend mode, added a layer mask and painted some of it out.

When I was done with the textures, I did some more additional contrast adjustment by adding three different adjustments. Textures can have a quite drastic effect on the contrast, it may need a further adjustment, when done. Two adjustment layers are curves adjustments, and the last is an exposure adjustment layer. The purpose is to keep the church and ground bright and balanced in light.

Finally I made a vignette on the image, by using yet another texture. Some textures with the right blending mode have a dark impact on the image. This time I used one of those textures to add a vignette.

Finally, I had to change the saturation slightly because a red hue had sneaked in, in the lower part of the image.

And that was what I did, to make something out of nothing.