Stars above the London Tower Bridge

I used to live in London back in 1991-92. London has changed a lot since then. Many new modern buildings have replaced old ones and I must admit, that they are doing a really good job of doing this. Magnificent architecture and daring shapes takes London into the new millennium, as the true world metro-pol city it is.

The London City Hall looks like a … space helmet or a twisted egg, and there’s this amphi theater right in front of it. And it is built just next to the old London Tower Bridge and it stands beautiful in the night. And behind my is the alley that leads to another of Londons new buildings, the Shard.

The photo is a 7 shot HDR ranging from -4 to +2. I often shoot with an exposure compensation of -1 or -2 in night conditions like this, with really really bright parts (lamps) and really dark shadows. I only use -2 if I shoot 9 shots. Why do I do that? Because the lamps really are bright in the night and the camera really is struggling trying to capture all light, so my -4 shots are aimed at the light sources only.

The 7 shots I tone mapped in Photomatix Pro. I have worked a long time with this photo afterwards both in Lightroom and in Photoshop, without really finding what I wanted. This is the original untouched photo (the 0 exposure): 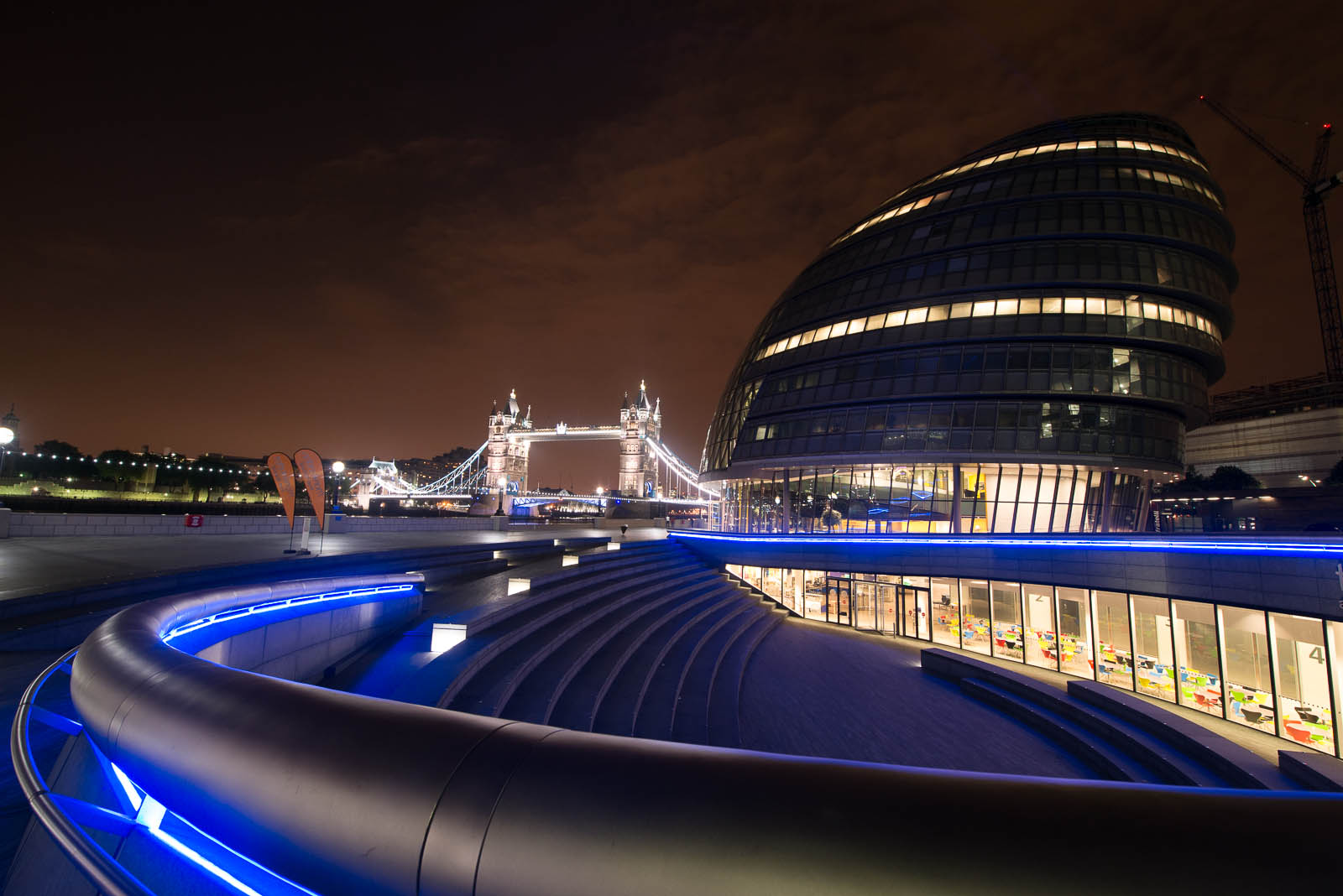 While this is in many ways is a nice photo I wanted more of it, and there are things I don’t like about it. As it turned out, it proved to be quite a problem to hit the right node, and the major problem really was the sky. It was far too orange to my taste, mind you it was kind of orange when I was there, but it just didn’t really work.

I tried a lot of different things. The HDR process only made the orange sky even worse. I tried working with the white balance and the helped a bit. In the end I ended up using very cold colors on is photo, to take out the orange colors,

While working the image I realized, that the light beams on the Tower Bridge shone up in the air, while not very easy to see I decided to exaggerate them and that helped quite a bit. I did that using dodge and burn tools, by raising the exposure in an area like a beam going up from the sky.

To emphasize the light beams even more, I increased the contrast on the clouds. What happened then, was that the upper left corner went black.

It was dark, but the increased contrast made it black and it looked like a hole in the clouds existed, and that gave me the idea of putting stars there.

I have this great photo of the Milky way I shot in Sweden some time ago, that lacks a good scene, but the stars really are nice. 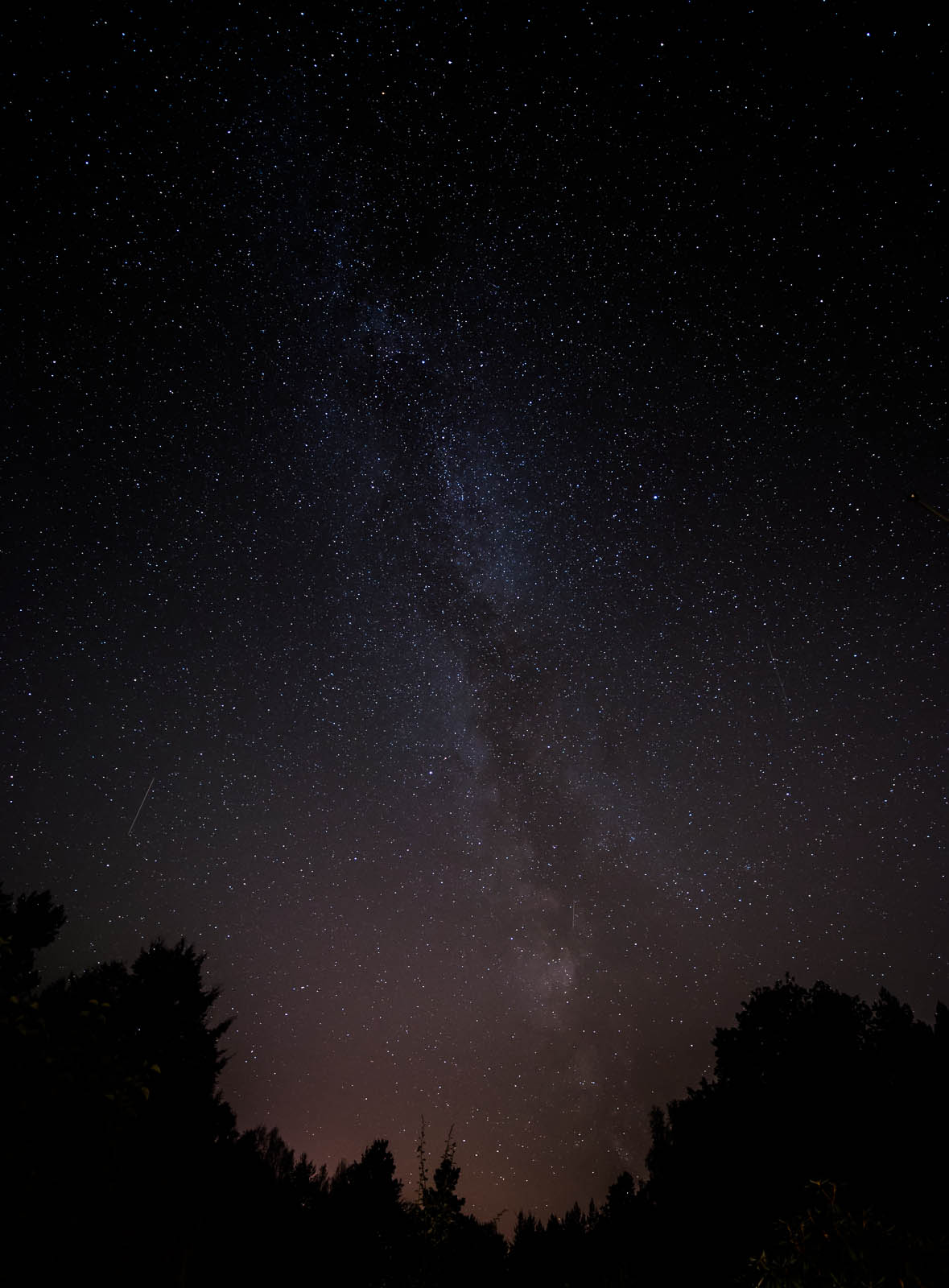 I decided to merge the stars into the left hand corner like this and I made the light beams even more visible using a curved layer. Now things started work for me! 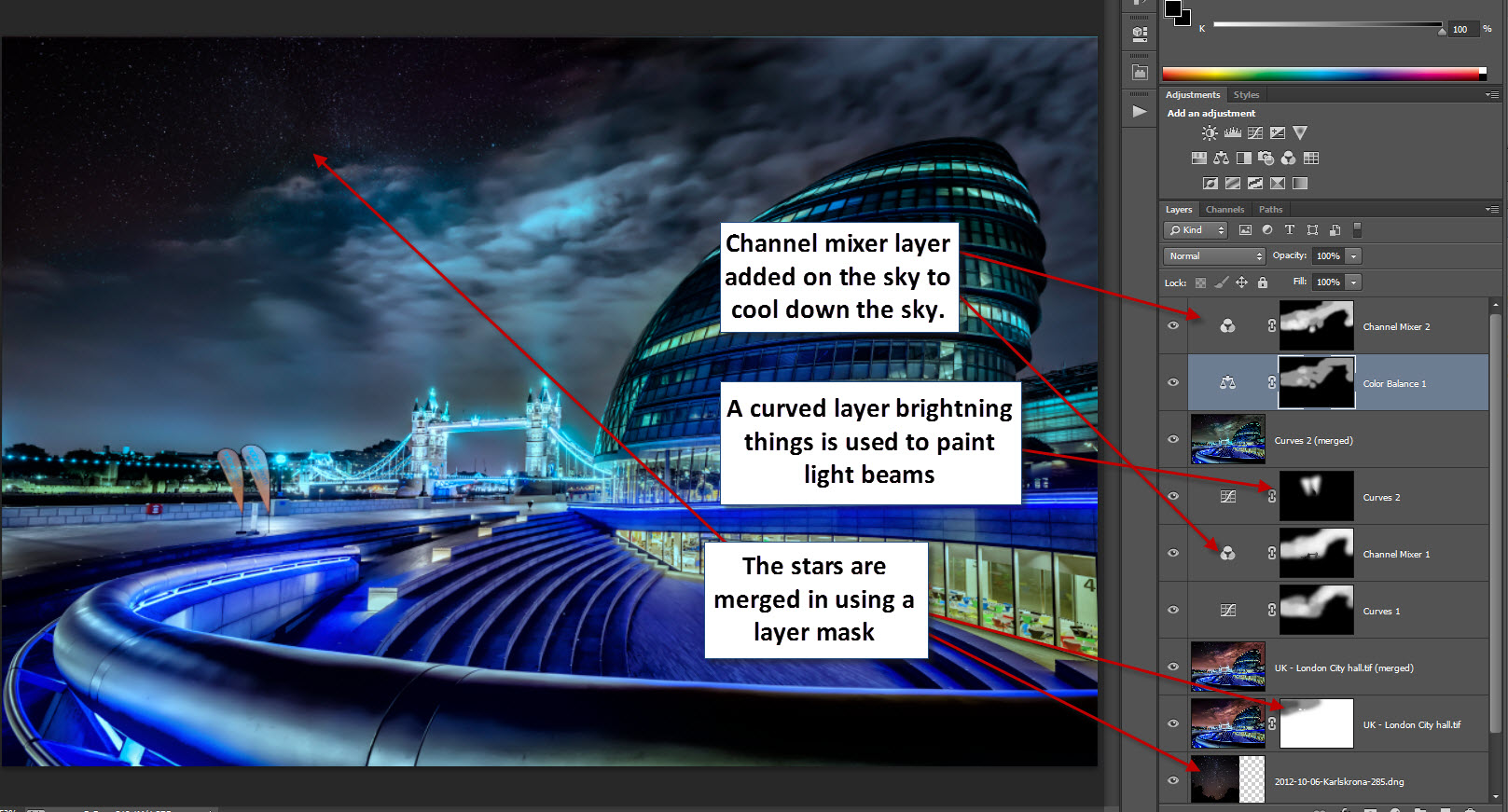 Here you can see that I add layers with a channel mixer. I do that to work with the colors and take out the orange. Things go a bit too blue and in Lightroom I ended up de-saturating a lot of the clouds and adding some yellow to the bridge, to make it work nicely.

I also removed the orange two flags. This required some detailed work with the clone stamp tool in Photoshop. My son said – wow it’s just like “Tron” – and his Daddy was happy! Even though it is “only” London.

4 thoughts on “Stars above the London Tower Bridge”