This is first edited in Lightroom, then exported to Photoshop, where I did a Topaz Filter and then some more adjustmens, a little noise reduction, and then back to Lightroom for the final adjustments.

After two nights in gorgeous Queenstown in New Zealand, we continued on our way. It was a clear blue and a little cold morning in November 2012. Just at the out skirts of Queenstown we pulled over the campervan and I shot a few shots, including this one.

It is a 5 shot HDR photo shot with my 28-300mm lens at 28mm. Processing wise this is fairly standard processing, first processed in Photomatix and then I blended layers in Photoshop CS6. Only the spiky grass thingie in the lower right hand corner have received a very special treatment. It’s in the shade and turned out too dark, so I had to ‘lighten it up’.

EXIF: 28mm, ISO 200, f/8.0, 1/50 sec.
Why? At a wide angle as 28mm you can get almost anything sharp, but not what’s absolutely closest. It is shot hand held, so I had to use a fast shutter speed on all 5 shots. By using ISO 200 instead of ISO 100 I made the shutter speed twice as fast. I didn’t dare to go higher on the f-stop (that is a lower number – remember, that they work counter intuitive), because the foreground had to be sharp too. Most of my shots in this spot failed, because the foreground was not sharp enough. I should have used a tripod and lowered the f-stop to perhaps f/16.

South Island on New Zealand has got these wonderful golden beaches up north on Tasman Bay. We took a water taxi, but because of the tide, we were dumped in the water and had to walk the rest of the 500m to the beach. It was mid thigh deep. I was quite worried about my photo equipment.

About the photo. This is a hand held 5 shot HDR photo. It lacks a bit sharpness in the front. A disadvantage of taking the shots hand held is that, you can’t always get all of the details right. However I do like the photo, composition and the clouds. Processing wise, this is a combination of a single and double tonemapped image that I blended in Photoshop. See my HDR tutorial if you want to know how to do that.

“Get up before sunrise and walk around Lake Matheson at sunset. See Mount Cook mirrored in the lake“. Said the guide book. “Yessir!” I thought, and I wasn’t disappointed. When we got up and drove the few miles to Lake Matheson it was pitch dark. We almost hit a japanese guy running in black clothes with backpack on his back. We arrived at the view point at Lake Matheson exactly at sunrise. Within five minutes the japanese guy turned up too, and he too had a camera. We ended up being a small group taking photos of this beautiful morning. This particular photo is taken about 30 minutes after sunrise. I had expected a golden sunrise, but of cause the mountains give shade a long time. The golden light came later.

This photo is the photo that I have used in detailed HDR tutorial you can find here.

Lake Tekapo in New Zealand can be very windy, which was the case this evening. The day after the surface of the lake was like glass. On the left lies Mount John covered in trees. On the the top there is an observatory and a cafe. The cafe makes really good coffee and the cakes are worth the strain to get to the top of the mountain, just as the view is very rewarding.

This is a 5 shot HDR. I tone mapped it in Photomatix and then I blended the five original shots into the tone mapped image, by using Photoshop. There is no part I have blended in 100%. The sky is blended in various degrees with the 0 and minus 1 exposure. The same goes with the rocks. The trees on the left is more or less the clean tone mapped version. In the end I used a Topaz adjust filter to add a little warmth and sharpness to the photo. This step I could have done by using adjustment layers, and Unsharp Mask in Photoshop as well.

Finally I took it into Light room and did a few adjustments. The right hand side of the trees was too dark. I added a little light by using the brush tool, and then I added little contrast global contrast.

The sand flies in Milford sound is pure Hell. The Maori’s said that their god created Milford Sound, and to prevent people for staying forever in such a beauty, he created the sand flies.
I took a bath in a repellent spray, but when I got home to my camper van a couple of hours later, I had this huge bump right on my forehead. Good thing, though, it only itches like hell for a week or so.
Milford Sound is one of the most photographed tourist attractions in New Zealand and it is understandable why. It’s massive size and beauty is amazing. Mitre Peak rises 1692m straight out of the water. Your sense of proportions really is working on overtime.
This is an HDR of 5 shots. ISO is 100, at F11 and 1,3 seconds for the 0 exposure.

Lake Tekapo in New Zealand lies in 700m above sea level. The lake it self is the oddest blue color, though you can’t see it at night. It sits very beautiful between snow covered mountains. Lake Tekapo and the observatory on top of Mount John (which is right behind me when I took the photo) is trying to become the worlds first UNESCO World Heritage Starlight Reserve. One criteria for that, is that all lamps point down, to avoid ‘light pollution’. So I thought a night shot from Lake Tekapo was appropriate.
This shot is a single exposure taken during a full moon, which explains the light on the stones.

This picture I have taken on the road through Arthurs pass on the South Island on New Zealand. It is one of the most beautiful roads I have ever driven on. This is Otika Gorge. Before the bridge was build, you had to drive this insane road this picture was taken on. Actually you can kind of see were it goes, if you look closely at the photo on the right hand side.
Technically, this is made from three exposures, with 3 EV steps between and then I made two tonemapped versions, giving me altogether 5 images that I merged together in Photoshop. And at last I did a little filtering and sharpening, without removing the dreamy impression.

When I was in New Zealand we got to see Hobbiton the Movie set, where we could see the Hobbit holes used by to film both Lord of the Rings and The Hobbit. But they are not Hobbit holes, you know! It is just a door and a window, with a small chimney. Even the green stuff on the wooden fence and gate, that makes it look old, is just yoghurt tossed on the wood and left for a few months. The Hobbit holes come in different sizes, the small ones are used when Gandalf is rumling around, and the large ones to make Frodo and Bilbo and the other hobbits seem small.

Hobbiton is located on a sheep farmers field and he has decided to make a tourist attraction out of the remaining movie set. Great location and funny to see. 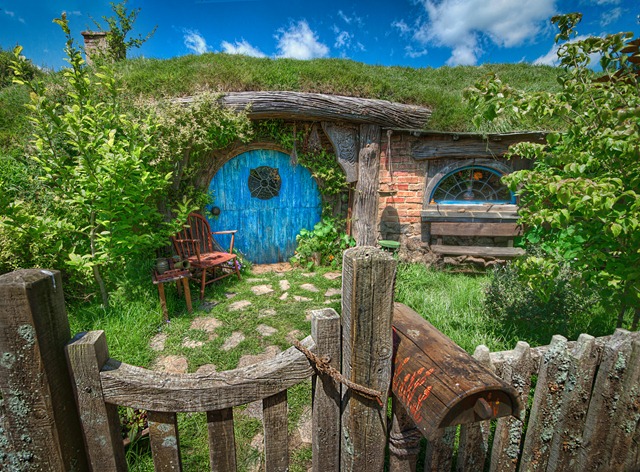