This one I’m quite anxious about. I have really worked this photo hard and don’t know if I went over the edge and over processed it. The sky was dramatic and had wonderful colors, but I have really extracted them quite brutally, but I do like the result. I think it’s nice.

It’s an 5 exposure HDR. Just by processing it as an HDR I really get a lot of nice texture both from the rocks and the sky. That’s one thing that HDR and tone mapping is good for. I then used OnOne photo filters to emphasize the sky even more. This I could have done in Photoshop as well, but it’s just easier to use a filter, which is a kind of a template.

The water I have left as the HDR version, which gives this ghosted water, which I sometimes like and other times don’t like. In this case I like it. However, in the lower right hand side corner I merged in the water from the brightest exposure. The brightest exposure has got the longest exposure time and has this wonderful smokey water as you can see.

So far so good – but I had a problem. The composition of the original photo had failed, but I did like the sky so much, so what to do? Let’s look at the original: 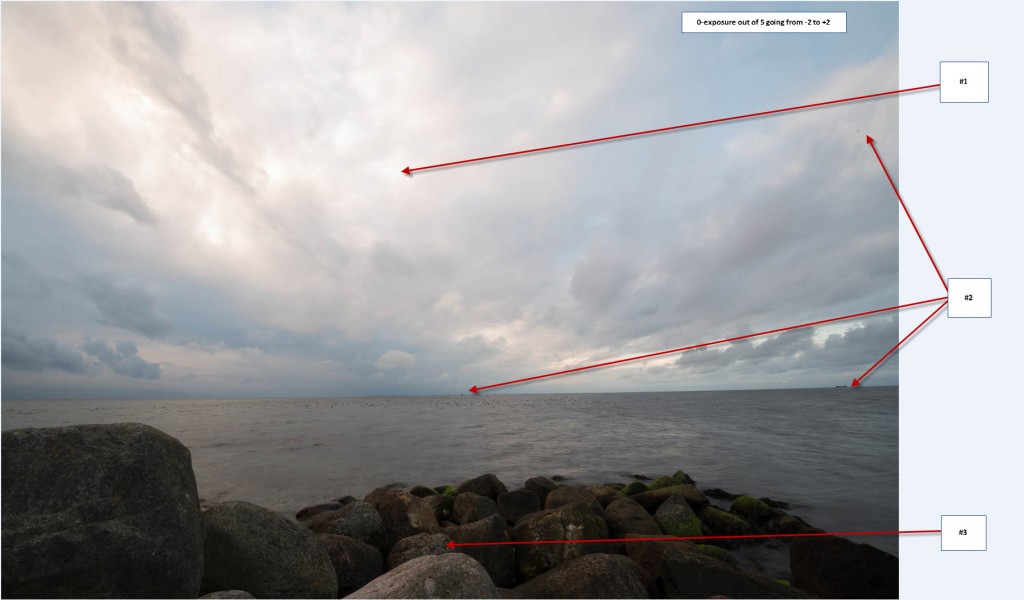 As you can see quite different from the final photo and much more flat and boring. But look at the stones. The sky is more or less the same, but the stones I have changed … a lot!

#1 The sky is really flat and is nowhere near what it looked like for real. What I have created is not what it looked like, either, but that wasn’t my purpose. Sometimes I make a portrait of reality, and at other times it’s more like a painting I make. This is a painting.

#3 The stones I stretched a lot. What I did was that I selected the square going from the horizon and down to the bottom. It is easy in this case, because the horizon is straight, otherwise I wouldn’t have been able to do it. I then used used the Edit->Tranform->Scale feature of Photoshop, and extended the lower part of the photo, until the large boulder in the left hand side of the photo was completely out of the picture. And that helped on the composition. Of cause it would have been much easier to get it right ‘in the camera’ when I shot it, but I failed to do that in this case, and I didn’t want to let go of the sky.

Lake Tekapo in New Zealand can be very windy, which was the case this evening. The day after the surface of the lake was like glass. On the left lies Mount John covered in trees. On the the top there is an observatory and a cafe. The cafe makes really good coffee and the cakes are worth the strain to get to the top of the mountain, just as the view is very rewarding.

This is a 5 shot HDR. I tone mapped it in Photomatix and then I blended the five original shots into the tone mapped image, by using Photoshop. There is no part I have blended in 100%. The sky is blended in various degrees with the 0 and minus 1 exposure. The same goes with the rocks. The trees on the left is more or less the clean tone mapped version. In the end I used a Topaz adjust filter to add a little warmth and sharpness to the photo. This step I could have done by using adjustment layers, and Unsharp Mask in Photoshop as well.

Finally I took it into Light room and did a few adjustments. The right hand side of the trees was too dark. I added a little light by using the brush tool, and then I added little contrast global contrast.

Leaning against the fence I was just able to capture all of the light house, thanks to my 14mm lens. I made this from one photo. I tonemapped it using Photomatix and did a version in Lightroom as well. Both images I imported into Photoshop. I have used the Lighthouse, as a non HDR version, but the rest as HDR. I hope you like it done in that a bit unusual way.