Roskilde Cathedral in the Mist

To create this photo I have used the clone healing brush and the perspective crop in Photoshop.  It is a 7 shot HDR photo, and I used Photomatix pro, to create both a single tone mapped image and a double tone mapped image, which I mixed with the original ones.

The original photo is not a bad one, but neither perfect. 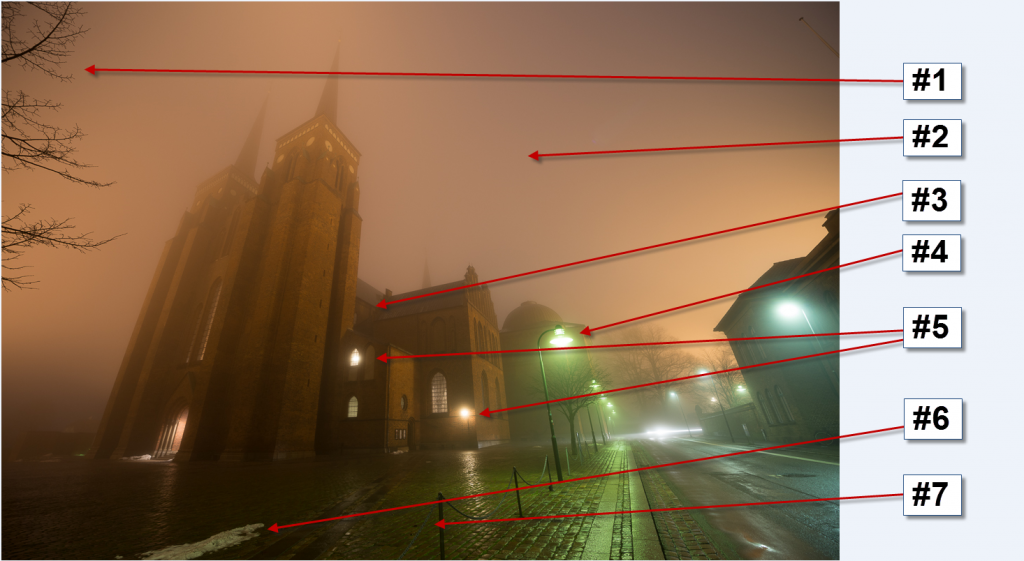 #1: I removed the branches. When I straighten the church, some disappeared, but I ended up removing them completely. When I took the shot, made sure, that they were included and did not cover the church. I used the brush healing tool in Photoshop.

#2 The sky I worked with, to emphasize the light in the mist. That is an important part of the mood. I increased the contrast and saturation a bit.

#3 The church I straighten to a certain level. I can’t straighten it completely, because it makes a small fat church, which is not the reality. The compromise is somewhere in between completely straightened and this. Ideally I would have gone further away, but that was not possible.

#4 The acid color of the light from these lamp posts I didn’t like, so I worked with the colors, and mixed that into my final photo. I did that, by making a new layer in Photoshop, opened the Hue/Saturation dialog (CTRL+U) and dialed back some of the yellow and green. I then mixed the lamps into my image.

#5 These lamps are blown out, but because I shot it in HDR I can achieve the moody great look from the lamps, in stead of just a white blob. There is not a lot of dynamic light in this photo otherwise, but the lamps I save.

#6 I then used more healing brush to remove the snow. I used a clone stamp after wards to get a better result on the cobble stones.

This is one of the photos, where you might ask “Why HDR it?” – well, I did get more details within the windows of the church and on the lamps. I also got more shots, so that I could remove people and the car coming around the corner. And then it added some of the magic, mysterious Jack the Ripper mood.

4 thoughts on “Roskilde Cathedral in the Mist”